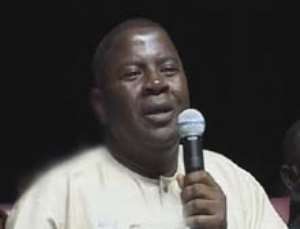 Bamboi (N/R), April 23, GNA - The Vice President Alhaji Aliu Mahama has assured Ghanaians that the government is determined to lead the nation into prosperity and as such will not renege on its promises. He said the significant achievements of the government within the three years that it had been in power "are there for all to see" and declared the government's commitment to the realisation of its goals and ambitions.

Alhaji Mahama was addressing a durbar of the chiefs and people of Bamboi to welcome him on his way to Brong Ahafo after a working tour of the Northern Region.

They were met in the town, where the Black Volta River separates Brong Ahafo from the Northern Region by Nana Kwadwo Seinti, Brong Ahafo Regional Minister, his deputy, Mr Yaw Adjei Duffour and other members of the Regional Coordinating team.

Long before the arrival of the Vice President at about 1930 hours, Bamboi was agog with pomp and pageantry as a large group of people especially the youth put up displays with marvellous dexterity on bicycles and motorbikes on the main road to give him a fitting welcome.

Alhaji Mahama called on Ghanaians to exercise patience and support the government in its efforts to achieve national prosperity. "The government is doing its best to do what is good for the country for the benefit of every Ghanaian", he said and noted the long neglect of the area by previous governments.

The Vice President declared: "We have come to work with you so collectively we can bring prosperity to this area" and announced that he was working closely with the Regional Minister and the Minister of Energy towards the provision of electricity in the town and its environs.

The government had acquired 15 million dollars from the Eximbank of India for rural electrification and the area was going to benefit from the programme, he added.

In apparent response to a host of problems enumerated by Nana Kwaku Dapaah 11, Omanhene of North Mo Traditional Area, Alhaji Mahama said the Ministry of Education would work to ensure that the area got a Senior Secondary School, as the only SSS was 72 kilometres away at Bole, the district capital.

On the lack of a telephone network in the area, the Vice President said the government had acquired 115 million dollars from the Chinese government for the extension of telephone lines in the country and the area would benefit under the programme.

Alhaji Mahama stated: "Party politics is all about the people's welfare and development and what I urge all Ghanaians to exhibit is tolerance".

He reiterated that the government had done so much and this could be seen throughout the country and urged the people to join hands with it for prosperity.

We are committed to the completion of the economically strategic Bole-Bamboi road, the Vice President assured the people.

Nana Dapaah had earlier expressed delight that for the first time in the history of the area, a sitting head of government had visited them and prayed for God's guidance and wisdom to enable the government to steer the country into prosperity.

Among the numerous problems confronting the area that the chief enumerated, were the lack of adequate health services as the people fell on Wenchi and Kintampo for medical care. 23 April 04