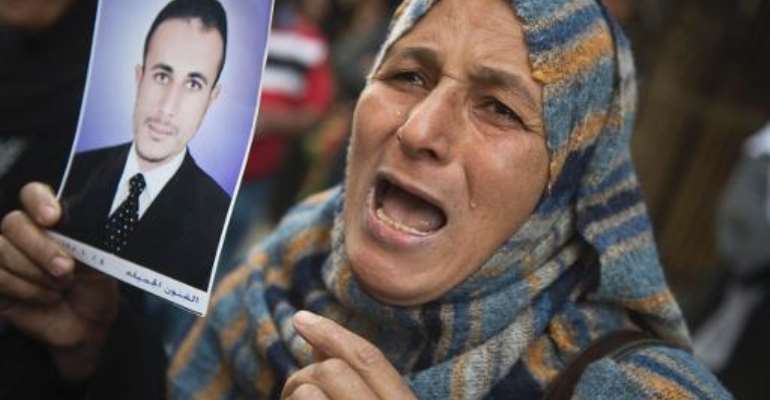 An Egyptian woman holding the portrait of a relative reacts outisde the court that sentenced 682 alleged Islamists and a Muslim Brotherhood leader to death on April 28, 2014 in the southern city of Minya. By Khaled Desouki (AFP)

The Association of Muslim Scholars responded by saying it "rejects these verdicts coming from a court that takes orders from those who came to power in a military coup and govern Egypt using coercion and repression."

In a statement issued late on Tuesday, the Qatar-based organisation said the sentences were "politicised and considered an insult to justice" in Egypt.

The Minya court in southern Egypt is set to confirm the death sentences on June 21.

It reversed 492 of 529 death sentences it passed in March, commuting most of them to life imprisonment.

Since the army toppled Morsi in July 2013, a crackdown targeting his supporters has left more than 1,400 people dead and 15,000 in jail.

Qaradawi, who was born in Egypt and is seen as a spiritual guide to the Brotherhood, issued a fatwa urging Egyptians to support Morsi, following his overthrow.

The cleric is himself wanted by Egypt's military-installed authorities and faces being tried in absentia.

Qatar had close ties with Egypt during Morsi's turbulent single year in power but relations nose-dived after his overthrow.

The gas-rich Gulf state has given refuge to a number of Brotherhood leaders who fled the bloody crackdown that followed Morsi's ouster.

Egypt has called on Qatar to respect a 1998 Arab counter-terrorism treaty and hand over Qaradawi and other wanted Islamists.