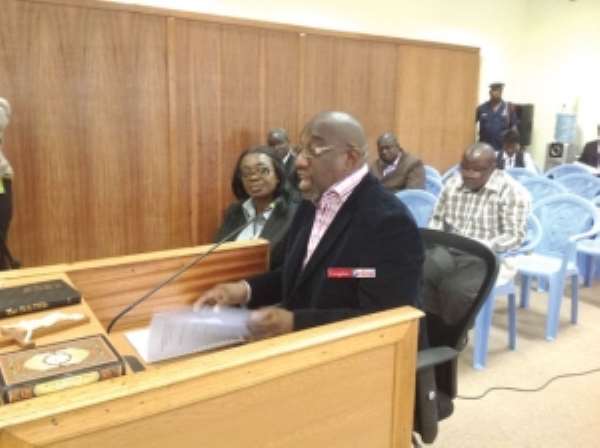 The non-involvement of key officials of the Ghana Highway Authority (GHA) in the arbitration between the Government of Ghana/Ministry of Roads and Highways and Construction Pioneers (CP) led to the wrongful payment of €98 million to CP, the Judgement Debt Commission was told Tuesday.

The commission was also informed that the Attorney-General's (A-G's) Department and the Ministry of Finance failed to use CP's tax debt of 44 million deutsche marks to offset part of the debt paid to CP.

This came to light when the acting Chief Executive Officer of the GHA, Mr Michael Abieteh Abbey, appeared before the commission in the company of Ms Dorothy Afriyie Ansah, a legal officer with the GHA, to give evidence on the matter of the payment of a judgement debt of €98 million to CP following an arbitration between the A-G's Department and CP. Non-involvement in process

Mr Abbey told the commission that the GHA was not part of the arbitration process and was, therefore, not privy to the details of how the process culminated in the payment of the said amount to CP.

According to him, although CP failed to execute a number of contracts based on which it went to court, it still made claims for profit lost and for designing the road.

But Mr Abbey maintained that the GHA had a case not to have paid CP the said amount but because the GHA was not party to the arbitration process, it did not know how the decision was arrived at.

The road contracts in question were the Biriwa-Takoradi, Yamoransah-Assin Praso, Akyem Oda-Abirem-Nkawkaw and Obuasi town roads. Failure to meet pre-conditions

Apart from the Biriwa-Takoradi and the Obuasi town roads that were executed by CP, Mr Abbey said, the government stopped CP from going ahead with the other two because the company had failed to meet pre-conditions for the project which included performance and security guarantees.

He, however, said CP contended that it had mobilised to site and also done some design works, for which it made a case for profit lost, with accumulated interest.

Mr Abbey said the contracts were not given out through the bidding process but negotiated and signed by the Minister of Roads and Highways on behalf of the government of Ghana, with the GHA named as the supervising engineer.

The role of the GHA as supervising engineer, he said, was to ensure compliance with specifications in the contract document and also to sanction payment. Contrasting views

But contrary to the view expressed by Mr David Ofosu-Dorte of AB & David Law, which consulted for the CP, when he appeared before the commission last week that the Ministry of Roads and Highways should have appointed a private consultant as supervising engineer and not the GHA, Mr Abbey contended that there was nothing wrong with that arrangement.

“As engineers, we were supposed to play a neutral role. It is not an easy task but it must be done, else in the event of a dispute, the engineers will be blamed and this will affect the government,” he asserted.

Besides, he explained, the GHA had played supervisory roles over the years and taken decisions that did not sit well with the ministry but it still insisted on having the right thing done.

To buttress his point, he said the decisions on the contracts were not left to the discretion of the engineer but based on specifications contained in the contract document.

“It is not in the interest of an engineer supervising a project to connive with the contractor to do shoddy work because it will eventually show and that engineer will be exposed,” he intimated. Urban roads

The Head of Finance and Administration at the Department of Urban Roads, Mr Philip Lartey, also appeared before the commission to tender documents with regard to three contracts given to CP.

However, the Sole Commissioner, Mr Justice Yaw Apau, observed that the documents were not dated, making it difficult to ascertain when they were signed.

“It is high time we left technical matters to the technical people and not politicians. If we leave these things in the hands of politicians, then things will happen,” he stressed.

But he was quick to add, humourously: “If you are a strong technical man and you talk about these things, you will be asked to proceed on leave.”