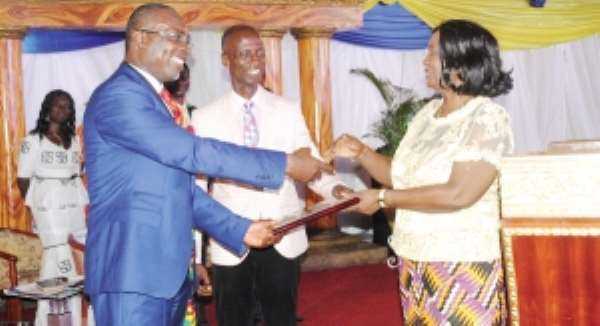 Rev. Joseph Baisie was yesterday inducted as the Greater Accra Regional Superintendent of the Assemblies of God Church, with a pledge to ensure that all churches within the region shift to the use of solar energy.

This initiative, according to him, would lead to a reduction in the reliance on the national grid.

Rev. Baisie also indicated that the vision of the new executive was to assist and equip pastors and local churches to fulfil their aspirations with excellence.

Vision
In an attempt to reduce unemployment in the country, Rev. Baisie gave an assurance that the new leadership would periodically organise seminars and workshops on entrepreneurship for all university students and graduates in the country.

Expressing concern on the rate of road accidents, Rev. Baisie said all local assemblies in the Greater Accra Region would in the next four years educate members of the church on road signs to reduce the number of accidents.

He said the church would partner the government to fight HIV/AIDS, corruption and other social vices in society.

“We will step our efforts in fulfilling our corporate social responsibility with excellence. As the light of the world, the church must set the pace in every area of our spiritual and socio-economic development,” he said.

Advice to church members
Rev. Baisie advised members of the church not to grumble and talk about failures, but rather look for solutions to rebuild the church and the nation and also entreated them to eschew corruption, laziness and mediocrity.

“I believe we have what it takes to make the mark. We are endowed to succeed. Yes we cannot afford to disappoint our generation. Let us arise in unity and build. Let us bury our differences, focus on the things that unite us so we can achieve greater heights,” he said.

According to Rev. Baisie, the church was getting worried about the breakdown of discipline and moral values in society and averred that the socio-economic challenges bedeviling the country's development efforts should not “let us sacrifice our conscience and values for cheap gains”.

“I will also appeal to the Judiciary to hand out sentences that will actually deter the entire society from indulging in social vices; punishments that will encourage all citizens to be more law-abiding,” Rev Baisie said.

Unity
The Chief Justice, Justice Georgina Theodora Wood, stressed the need for unity within the church and among Ghanaians to ensure peace and harmony.

She described Christian unity as “a heart union of believers ready to work together for the purpose of glorifying God and furthering the work of His Kingdom”.

Justice Wood also said there was strength in unity and called on members of the AGC to support the leadership of the church to enable the church to fulfil the divine mandate of God.

According to Justice Wood, leadership positions are positions of service and told the new leadership that their role included the winning of more souls for God's Kingdom.

She urged members to support the leadership of the church by providing wise and good counsel and added that “it would not be helpful to make personalised comparisons, or false or praise singing or commendations geared toward any favours”.

The CJ is a chorister and a Sunday School teacher of the church.