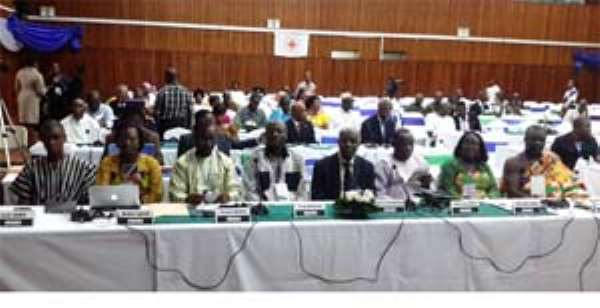 The investiture took place during the WARSO's Executive Committee Meeting on April 10, 2014 at the Miatta Conference Centre, Brookfields in Freetown, Sierra Leone.

The three Ghanaians were honoured as members of the Organisation for their immense contributions to road safety management in Ghana and the West Africa sub-region.

Daasebre Kwebu Ewusi VII is a well-known road safety advocate who is very committed to road safety improvement in his traditional area. Daasebre Ewusi VII founded the Nana Ewusi Road Safety Foundation, which is into the mobilisation of funds and other resources for road safety training, advocacy and awareness creation programmes.

Through the Foundation, the Chief has significantly helped to increase awareness for best road safety practices in his traditional area and the Central Region in general.

During his tenure of office as Chief Executive of the DVLA (2009 - 2013), Noble Dr Justice Amegashie ensured the establishment of computer-based theory (CBT) test as a means of improving the quality of drivers that are licensed to drive.

He also facilitated the development of the regulation for the operations of the private vehicle test stations (PVTS).

Ing Noble John Appiah, now Managing Director of Metro Mass Transit Company Limited, has been on the frontline of road safety practice for over 30 years. Until 2013, he was Executive Director of the National Road Safety Commission (NRSC) of Ghana for over a decade. During his tenure, Ing Appiah personified the NRSC as an organisation, a product and a service.

He led the process to build the Commission into a very respectable, visible, proactive and data-led public agency with a handful of staff who reflected the vision of the Commission.

The National Road Safety Commission of Ghana diligently constructed under his leadership what has become known as the 'African and Ghanaian model' at managing road safety.

The effort of this example under his leadership led to several study visits from contemporary organisations from Lesotho, Uganda, South Sudan, Zambia, Mali, among others; and the historic invitation to address the 66th Session of the UN General Assembly on Road Safety in 2012 on Ghana's road safety management approach.

The West Africa Road Safety Organisation (WARSO) was inaugurated on  May 8, 2008 under the auspices of the Economic Community of West African States (ECOWAS) by the then President of the ECOWAS Commission, His Excellency Dr Muhammed Ibn Chambas. The main goal of the organisation is to promote and reinforce road safety activities and practices in West Africa through effective management of road safety and traffic matters with a view to drastically reducing road traffic crashes. It is made up of 15 member countries and four non-governmental organisations. Ghana is the Deputy General Secretary of the organisation.