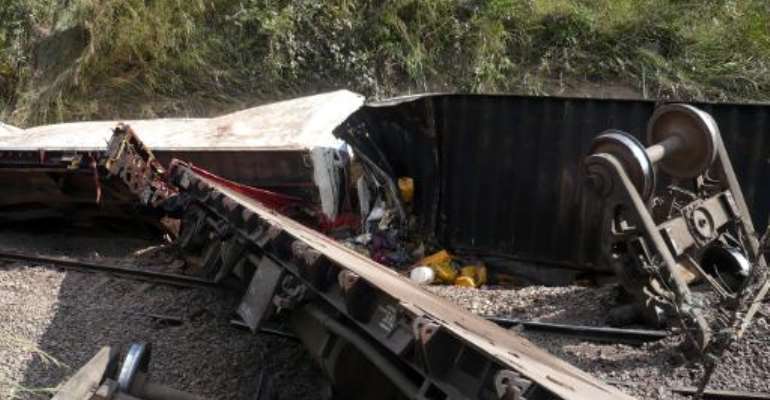 Derailed wagons after a train sped off the rails 65km north of Kamina, in the southern province of Katanga, Democratic Republic of Congo, on April 22, 2014. By Numbi Mathys (AFP/File)

Kinshasa (AFP) - The toll in a train crash in DR Congo last week was raised to 74 dead on Sunday, the country's health minister said.

Many people were trapped for days in the mangled wreckage of the goods train that flew off the rails in a swampy region about 65 kilometres (40 miles) north of Kamina, in the southeast of the country.

"There are 74 dead on Sunday night" and a further 163 injured, minister Felix Kabange Mukwapa told AFP, adding that about 20 bodies had been recovered from under one of two carriages that overturned and was still lying on the tracks five days after the accident.

Earlier tolls had been revised from 57 to 48 but later went up again.

A newly purchased locomotive hurtled off the track on Tuesday as the goods train, bursting with illegal passengers, rounded a bend.

Many seriously injured were taken to Lubumbashi, the capital of the mineral-rich Katanga province, some 600 kilometres (375 miles) from Kamina, where the train began its journey.

Its planned destination was Mwene-Ditu in the diamond-mining province of Kasai-Oriental.

Witnesses said the train was carrying hundreds of passengers both inside and on top of its carriages, many of whom had paid an illegal reduced fare to ride the train without a proper ticket.

Train crashes are fairly frequent in Democratic Republic of Congo, where the railway lines were built under Belgian colonial rule.

Little maintenance work has been done since independence in 1960, but the World Bank is currently financing a programme to refurbish the network.