We Expect to Qualify for MCA - Finance Minister 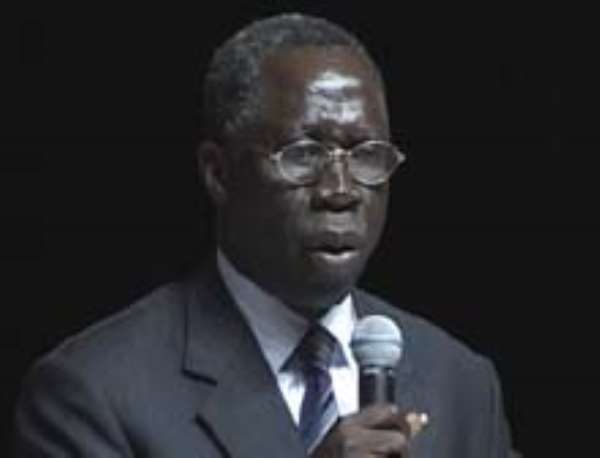 A few weeks before the Bush administration is scheduled to announce the list of countries eligible for assistance under an expanded foreign aid program, known as the Millennium Challenge Account (MCA), Ghana's Minister of Finance is in Washington campaigning for his country to make the cut.

"Our achievements in the last three years have convinced even the doubting Thomases that Ghana is a good place to invest," Yaw Osafo-Maafo told corporate representatives, diplomats and lobbyists at a roof-top reception Tuesday evening sponsored by Coca Cola and the Whitaker Group, a consultancy firm headed by Rosa Whitaker, the former assistant U.S. Trade Representative for Africa, which has a contract to represent Ghana in the United States.

Inflation dropped from 41 percent in 2000 to 10.2 percent last month, the finance minister said. This has contributed to the government's poverty reduction goals, he said, because "inflation is the enemy of the poor."

Since the current government took office in late 2000, following the election of John Agyekum Kufuor as president, the rate of economic growth has risen from 3.7 per cent to 5.2 per cent. "We're working hard to achieve 8 percent this year," the minister said, adding that a double-digit annual rise is an attainable goal.

Speaking to a breakfast on Monday sponsored by the United States Ghana Economic Council, Osafo-Maafo cited as an indicator of a new investor-friendly climate in Ghana recent decisions by the world's two largest gold mining companies to invest in his country. The Kufuor government has created the conditions that make Ghana attractive, he said. "There's always been gold in Ghana," he said. "Newmont and AngloGold didn't come earlier because there wasn't a conducive environment."

The country recently received a B+ rating from Standard and Poor's, the minister noted, which has opened the door for taking a bond issue to market once the country has completed payments on previous debts under the World Bank program known as HIPC (heavily indebted poor countries), which will likely happen by July.

Ghana's economic performance should make the country eligible for Millennium Challenge Account funding, Osafo-Maafo said Tuesday night. "We fully expect to qualify for the first tranche," he said. An additional indicator of the country's economic health, he said, is the fact that foreign exchange reserves now total four months of imports, compared to three weeks when Kufuor took office. The minister delivered the same message in meetings with U.S. government officials, the World Bank and the International Monetary Fund.

One published analysis of the countries likely to qualify for MCA assistance predicts that Ghana will not be selected. A March 19 memorandum by Steve Radelet from the Center for Global Development, a Washington-based think tank, said a 'strict interpretation' of the Bush administration's guidelines would leave Ghana off the list. However, an alternate ranking method recommended by Radelet and colleagues at the Center would qualify Ghana for MCA participation in the first year. And an updated version of the memo Radelet provided to Osafo-Maafo this week indicates that Ghana can now expect to be among the MCA qualified countries when the administration's list is released.

"Ghana is a good place to make money," Osafo-Maafo said. He cited the experience of Coca Cola, which has seen its volume grow from eight million bottles per year to 28 million in just over three years. Representing Coca Cola at the Tuesday night reception, Percy Wilson, a former Coca Cola Africa executive, said the company is "very bullish" on Ghana's future and appreciative of what President Kufuor has accomplished on the economic front.

The president has created a special investment advisory committee to provide private sector input, especially from companies with a long history of involvement in the country, including Barclay's Bank and Coca Cola, Osafo-Maafo said. He also highlighted new legislation he piloted through Parliament to tighten procurement rules throughout the government and impose stricter and more timely audit procedures.

"Transparency is the key to development," Osafo-Maafo said. "Corruption is Africa's nightmare."

The government has introduced incentives for agriculture, which accounts for 38 percent of the country's domestic output, the minister said. One priority is promoting local production to replace food imports, which currently cost $500 million each year. Another is encouraging investment in value-added industry, so Ghana can export canned pineapple and juice, not just the fruit, and chocolate products not only cocoa.

At the Monday breakfast, Florizelle "Florie" Liser, the assistant United States Trade Representative for Africa, pointed out that the African Growth and Opportunity Act, known as Agoa, allows countries like Ghana to export many value-added products to the United States duty free. "I consider Agoa extremely important for the growth and stability of Ghana," Osafo-Maafo said.

Ghana, with a population of 20 million, offers investor a gateway to the 250 million people in the Economic Community of West African States (Ecowas). Accra, the capital, was selected as headquarters for the six-member monetary zone of English-speaking countries, after the country moved to the top of the group in complying with the membership criteria. Ghana has met the cap on a budget deficit (not more than five per cent of GDP), on Central Bank financing of the budget deficit (not more than 10 per cent of previous year's tax revenue), and on gross official reserves of at least three months of imports.

The minister expects to meet the fourth requirement, single digit inflation, sometime this year. Of the other countries in the union, Nigeria had met two of the criteria at the end of 2003, Gambia and Sierra Leone one, and Guinea and Liberia none.

Addressing the possible impact of national elections later this year on the economy and on fiscal policy, Osafo-Maafo told the Monday breakfast that the government "will not do any stupid spending," as was done by the previous government during the campaigns in 1992 and 1996.

"Ghana has a history of poor financial discipline in election year," an IMF report warned last year. Osafo-Maafo said he would choose "to lose my job" rather than reverse the economic progress that has been made.

But he also said the government has resisted pressure from the International Monetary Fund to reduce the government subsidy on oil, since the resulting rise in the price for consumers would be very unpopular. "I told the IMF it was not wise to increase oil prices in an election year," he said. "Ghana should not create political instability in a region where so much instability exists." he said.

At the beginning of 2003, the government removed oil subsidies and allowed prices to nearly double, a move that was roundly criticized by the political opposition and trade unions. Late last year, the government retained pricing levels for petroleum, electricity and water prices, even as steadily rising world prices increased import costs.

To meet the shortfall between a budgeted price of $32 a barrel and the current $35 per barrel level, the government is drawing upon a levy that was introduced to handle such a contingency and is not having to draw against the national accounts, Osafo-Maafo said.