Kerry to lead peace mission to Africa next week 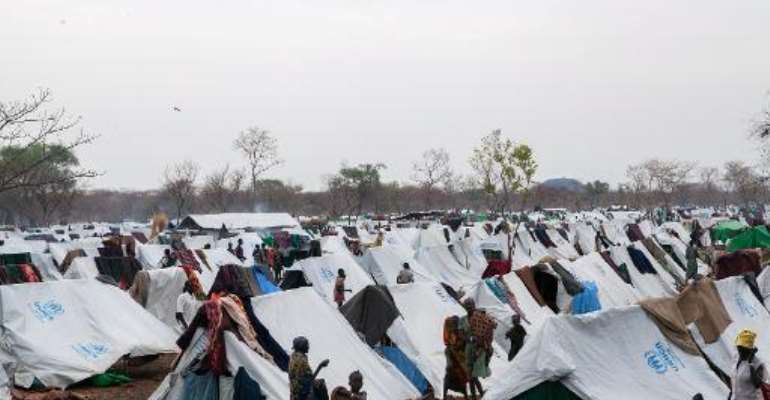 Picture shows general view of the Kule refugee camp near the Pagak Border Entry point in the Gambela Region of Ethiopia, on April 2, 2014. By Zacharias Abubeker (AFP/File)

Washington (AFP) - Top US diplomat John Kerry heads on his first major tour of sub-Saharan Africa next week with talks on some of the most brutal conflicts plaguing the continent high on his agenda.

His stops in Ethiopia, Angola and the Democratic Republic of Congo will focus on peace and democracy efforts in various countries, officials said Friday.

Kerry would also "engage with civil society and young African leaders, who will shape the continent's future, and promote trade, investment and development partnerships in Africa."

He will first travel to Addis Ababa to hold high-level talks as well as "to discuss efforts to advance peace and democracy in the region."

Ethiopia has been hosting peace talks between South Sudan's government and rebels aimed at ending a bloody four-month civil war, which has left thousands of people dead and over a million displaced.

The US has special ties to South Sudan having helped give birth to the world's newest nation in 2011, and Kerry has often spoken of Washington's "sense of responsiblity" towards the fledgling country.

Kerry will be accompanied by special envoy to South Sudan Donald Booth who has been taking part in the talks in Ethiopia.

But it remained unclear whether Kerry would visit Juba during his Africa trip, with Psaki saying she had no extra stops to announce and that he has a "range of places he'd like to visit."

From Ethiopia he will travel to Kinshasa for talks with President Joseph Kabila on how "progress in neutralizing some of the dozens of dangerous armed groups that victimize the Congolese people can be consolidated," Psaki said.

The US secretary of state also wanted to explore "how to best advance the DRC's democratization and long-term stability, including through a timely and transparent electoral process."

He will be accompanied by US special envoy to the Great Lakes region Russ Feingold, who has taken a leading role in brokering a peace deal with M23 rebels in hostilities which date back to 1994.

The DRC government has gained more control in the conflict-hit eastern areas since a national army offensive, backed by a special UN brigade, forced the powerful M23 rebels to lay down its arms in November.

But several dozen armed movements -- community-based militias, army defectors and rebel forces, both native to the DR Congo and from neighboring Rwanda and Uganda -- remain highly active in the east.

From the Congo, Kerry will head to Angola to meet President Jose Eduardo dos Santos who has ruled the energy rich southern African state for 35 years and retains a firm grip on power.

Kerry will "commend... Angola's leadership of the International Conference on the Great Lakes Region and encourage the president's continued personal engagement in the Great Lakes peace process," Psaki said.

Kerry has visited Ethiopia once since becoming secretary of state in February 2013 to take part in an African Union summit, but he did not travel to any of its surrounding neighbors.