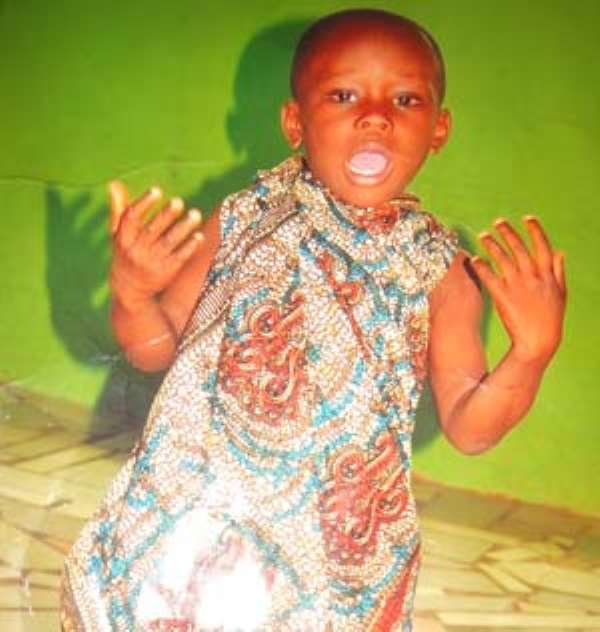 The body of an eight-year-old boy believed to have been murdered in cold blood, was discovered lying in an uncompleted septic tank on the premises of the Dansoman Ebenezer Senior High School, around 4:30pm last Tuesday.

The deceased, identified as Nana Yaw Buabeng, aka 'Caterpillar,' had his head and the two thighs severed and his genitals removed, after he had been reported missing for two days.

Findings
Briefing DAILY GUIDE on the incident, Chief Superintendent Antwi Tabi, the Dansoman Divisional Police Commander, said the police received information Tuesday evening that the body of a boy believed to have been beheaded had been discovered on the premises of the school.

When the police visited the scene, they discovered that the boy, who was lying in a supine position, had his head cut off, with thighs and genitals missing.

Chief Superintendent Antwi Tabi said the police suspected a case of murder and had since launched investigations into it.

Marley Kwao and Kojo Buabeng, parents of the deceased

Preliminary investigations revealed that on the day Nana Yaw got missing, two people – a man and a woman – had visited his parents' house to pick him up.

Two of his peers who saw the two suspects calling the boy by his name, said they took him to a nearby fast food joint to buy fried rice for him.

The victim was never seen again until the body was discovered Tuesday evening.

The police officer said the fried rice seller and the security man in charge of the school had since been invited to help the police trace the criminals.

'We strongly believe that the victim might have been lured by the perpetrators of the act with the take-away food,' he underscored.

Parents' Agony
Meanwhile, Madam Merley Kwao, 27 and Mr. Kojo Buabeng, 31, parents of the deceased, were really devastated about the incident when the paper visited them.

Narrating how their child went missing from the house to the paper, Madam Merley, a mother of three said, she was sitting outside her house with a friend that day around 8:00 pm.

'While chatting with my friend, my little child defecated in her diaper so I called Nana Yaw to bring me a new one from our room.

'After I had changed my little girl's diaper, I gave the used one back to Nana to dispose of and go to bed,' she claimed.

Nana Yaw's mother said it was after she had seen her friend off and returned to their room that she realized her son was not in bed as she thought.

The aggrieved mother said when she asked some of Nana Yaw's friends in the neighbourhood, she was told two persons came to call him.

The friends told the mother that they saw Nana Yaw and a lady standing at a nearby fast food joint, buying fried rice.

'My husband later returned from town and together, we combed the whole area in search of my son but to no avail,' Merley narrated.

She continued, 'The following day, we reported the matter at the Dansoman and the Mamprobi police stations.

'Around 4:00 pm Tuesday, April 22, 2014, one of my neighbours rushed to inform me that the body of my son had been discovered in a manhole at the Ebenezer Senior High School.

'When I rushed to the place, lo and behold, I saw that the body was indeed Nana Yaw's,' she sorrowfully intimated.

Neighbour's Reports
One of the neighbours (name withheld) said around 7:00 pm that Sunday, a man who claimed to be a friend of her husband asked her to let one of his sons follow him to collect some items the father had sent to them.

The source said the complainant immediately went into her room to call the husband to ascertain the truth and when she returned, the man had vanished from the house.

She said her husband denied sending anything through anybody to be given to them.