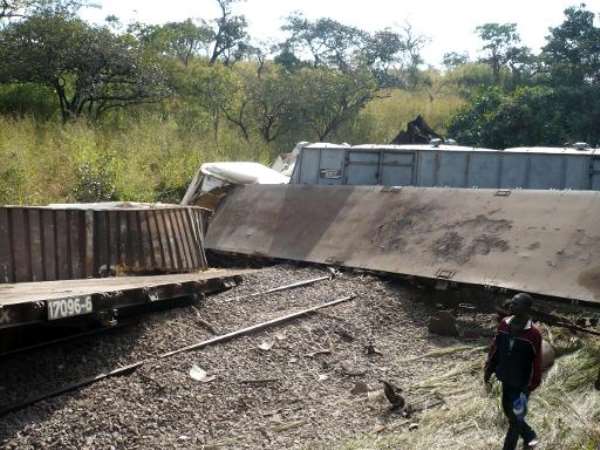 Kinshasa (AFP) - Rescue teams and medics on Thursday attempted to save survivors trapped in the mangled wreckage of a train that flew off the rails in the Democratic Republic of Congo, killing at least 57.

"A special crane with a team specialised in derailments arrived on site at 11:00 pm (2100 GMT Wednesday) to lift up the wagons," health ministry official Felix Kabange Numbi said, after visiting the remote accident site with other officials.

A newly purchased locomotive hurtled off the track in a swampy region Tuesday as the goods train, bursting with illegal passengers, rounded a bend about 65 kilometres (40 miles) north of Kamina in the southeast of the country.

The high speed on a curve caused 15 of the train's 19 cars to overturn, government spokesman Lambert Mende said.

The latest death toll issued by the government stood at 57 on Thursday, but other sources said the figure was higher.

Local human rights activist Timothee Mbuya said Wednesday that "so far at least 100 bodies have been taken from the train and buried, because there's no morgue."

Kabange Numdi said Thursday that while at the site of the crash, he had spoken with "a woman whose leg was trapped by a carriage, and now they have just got her out."

"I myself counted 40 dead bodies on Wednesday," the doctor added. "This morning I was told that the toll had risen to 48. There are moreover 162 injured people and 11 seriously hurt. The seriously injured will be taken today to Lubumbashi."

Lubumbashi is the capital of the mineral-rich Katanga province, some 600 kilometres (375) miles distant from Kamina, where the train began its fateful journey. The planned destination was Mwene-Ditu in the diamond-mining province of Kasai-Oriental.

Witnesses said the train was carrying hundreds of passengers both inside and on top of its carriages, many of whom had paid an illegal reduced fare to ride the train without a proper ticket.

Many people were still trapped by the mangled wreckage, witnesses added after the accident.

A medical team from an army base in Kamina has gone to help survivors, while Martin Kobler, who heads the United Nations mission in the country (MONUSCO), said he had asked its personnel to bring all needed assistance.

Mende said it appeared that engine failure had caused the train to speed out of control, but added that an investigation was under way into the exact reason for the crash.

Train crashes are fairly frequent in DR Congo, where the railway lines were built under Belgian colonial rule.

Little maintenance work has been done since independence in 1960 but the World Bank is currently financing a programme to refurbish the network.