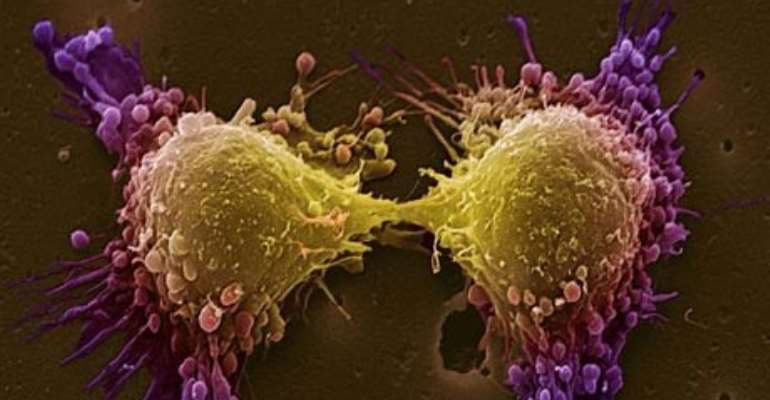 Do you have prostate problems? If you are a male and over 40, you could very well begin experiencing them. Even though, Prostate cancer is rare in men below the age of 50 years, and in North America the disease is twice as common in black men as it is in whites. Prostate cancer should not be confused with benign prostate hyperplasia (BPH) - (swelling of the prostate gland), which has similar symptoms and occurs often in older men but is not a type of cancer. Prostate Cancer is malignancy of the prostate gland. The various human cancers are diseases in which one of the many cells of which the human body is composed is altered in such a way that it inappropriately replicates itself again and again, producing millions of similarly affected self-replicating descendant cells, some of which may spread to other parts of the body and eventually overwhelm it. Prostate cancer is among the most common cancers in men. The problem here is that it is seldom detected early. The cancer usually grows slowly, and most men die of other causes before prostatic cancer proves fatal. Essential to locating prostate cancer early is a regular, annual checkup by a doctor, including a rectal examination. With a rubber-gloved finger, the doctor can feel part of the gland and determine if there are any hard, button-like nodules, which could mean cancer. If any spots are found, further tests will be performed, including a biopsy, to determine if cancer cells are present.

The prostate is made up of a well-muscled capsule within which are found 30 to 50 saclike glands. These glands produce the prostatic fluid (semen), without which a man would almost certainly be infertile. However, not all the prostate's functions are known, but its primary purpose seems to be to produce the fluid that nourishes millions of sperm cells and provides them with a medium to swim in. Thus, it is vital for a man's fertility. It can, though, also cause him problems as he gets older. The tissue within the glands is folded, allowing for expansion and storage as the fluid is produced. After a male reaches puberty, the sacs begin producing a small amount of fluid each day, which is normally voided with the urine if he has no sexual relations. Shaped like an inverted pyramid, the walnut-sized organ (prostate) lies in the lower abdomen under the bladder surrounding the urethra. It is peculiar to the male but related in tissue type to the female breast. At the time of birth, it is not much larger than an almond. However, with the onset of puberty, it grows to be as big as a chestnut.

If the sacs within the prostate gland become infected, inflamed, irritated, or congested with fluid, they may press on the urethra and hinder the elimination of urine. The same is true if the gland itself becomes enlarged. The early symptoms of this problem usually are almost unnoticed and are much the same regardless of the basic cause. The sufferer may have to get up once or twice during the night to visit the bathroom, something he did not have to do before. Gradually, he has to get up more frequently. Despite feeling an intense need to urinate, the stream is weak and hesitant. He has a feeling of fullness even though he has just been to the bathroom. Now the prostate is making its existence known in a painful, irritating, and sometimes embarrassing way.

Nevertheless, to cope up with prostate cancer there are different forms of treatment available, depending on the state of growth. No single treatment has proved best, but among those available are hormonal treatments, radiation, and laser or conventional surgery. With surgery the gland is removed, resulting almost invariably in impotence. If surgery does not offer total removal of all malignant cells, it can be a cautious undertaking because the condition tends to spread faster from residue carcinoma in situ. Consequently, in cases where no surgery can be done the ultimate solution is use of diet to bring the cancer symptoms into control. Interestingly, studies have been made that show the prostate to be a major center for the concentration of zinc in the body. When a man's diet is inadequate in zinc, the prostate gland begins to lose this trace element, and some researchers link this with a variety of prostate problems. Many men claim to have found relief for their troubles with the aid of a dietary supplement of zinc. With credit to U.S. Department of Health and Human Services, “Scientists have found some relationship between a lack of certain vitamins—A and C—and cancer. For example, diets low in vitamin A has been linked to cancers of the prostate gland, cervix, skin, bladder and colon.” This fact magnifies our postulated suggestion that fruit salads and natural fruit drinks without preservatives are good for clients living with (Prostate) cancer. In addition, tomato may have a substance that inhibits the growth of prostate cancer. The substance that gives the red color to tomatoes, lycopene which is a rich sources of the carotenoid antioxidant, may reduce the size of carcinogenic tumors of the prostate and reduce metastasis or the spread of cancer to other tissues of the body. A study published by the U.S. National Cancer Institute “revealed that the tomato and all of its derivatives had a positive effect not only against prostate cancer but also against that of the pancreas, lung, and colon.”

Furthermore researchers from the Karolinska Institute in Stockholm says, “Men who eat large amounts of fatty fish, such as salmon, herring, and mackerel, are two to three times less likely to develop prostate cancer than men who rarely eat fish.” The 30-year study of 6,272 men took into account risk factors such as smoking. The researchers concluded that “so-called omega-3 fatty acids [found particularly in oily fish] apparently impede the growth of prostate cancer.” The same fatty acids “also reduce the risk of heart attack,” says the report. Hence, experts advise people to eat fish “once or twice a week.” However, we also need to be enlightened that the food we eat may be another unsuspected cause of cancer. Some sections of studies have also suggested that certain foods and some nutrients contained in may be associated with the development of cancer. Most cancer-causing substances (carcinogens) probably enter the body through the alimentary canal in food and beverages. Although some foodborne toxins, pesticides, and food additives may be carcinogenic if taken in sufficient quantity, it is primarily the foodstuffs themselves that are associated with cancer. Some dietary patterns or components may promote cancer, while others may inhibit it.

In other findings, it is established that a high intake of dietary fat is a risk factor for cancer and this is in apparent reference to fats from red meat like beef. This is also evidenced by a growing body of evidence that a diet low in fat and animal products and rich in fruits and vegetables, including the cruciferous type, is protective against prostate cancer. This protection may be partially explained by a fibre found in fruits and vegetables called pectin, which has been shown to possess anticancer properties. Prostate cancer rates are low in countries such as Japan where soy foods are consumed regularly, but there is no direct evidence that soy protects against the disease. The possible protective effect against prostate cancer of vitamin E and the mineral selenium is under investigation.

—
In line with what has to be consumed or taken within the alimentary system for medicinal puroses, herbs have been suggested for such conditions as the common cold, indigestion, constipation, insomnia, and nausea. However, herbs are also sometimes used for more serious ailments not only as a cure but also as a preventive and palliative measure. For instance, in Germany and Austria, the herb saw palmetto (Serenoa repens) is used as a first-line treatment for benign prostatic hyperplasia (BPH). In some countries this disorder eventually affects 50 to 60 percent of men. Consequently, it needs no further emphasis to stress the vitality of conserving our florae and faunae because of our symbiotic relation that exists between us. Politicians, charcoal burners and wood business mongers have a shelf life whilst nature needs to be conserved for our future generation to benefit from the solutions that it has to offer. Since most of our government political system have not adequately funded the herbal remedy potential and have sold out our forests and game parks for wood processing and mining activity respectively, it is imperative that the cause of the swelling be diagnosed by a physician who would prescribe a tycoon cocktail of drugs to make sure that the condition does not require more aggressive intervention, as in the case of cancer. Even though our florae and faunae may offer solutions to some of our medical challenges, extensive consultations may be the most realistic and reasonable thing to do in any medical condition with a trained practitioner as most of the herbal remedies are not extensively studied.

Perhaps deservedly, over the years the word “cancer” has acquired a strong negative overtone. Phrases such as “spreading like a deadly, insidious cancer” have impelled many people to close their minds to the word and its true significance. Yet, today, when brought out into the open in an objective manner, the subject assumes less fearsome proportions. Instead of always being “deadly,” it often becomes “curable.” Instead of always “spreading,” it is often terminated while still localized. One notable medical figure and urologist once gave a general advice on prostate health indicating that “To the man who is reaching the age where prostatic problems are most likely to plague him, good diet is essential . . . Although much of the value of zinc, vitamins, and diet to prostatic health is still in the exploratory stage and the statistics are not conclusive, the evidence is convincing enough for me to sit up and listen carefully, and I think others should do the same. However, this is important in all self-care though all good health never relies only on diet, vitamins, or minerals.” Consequently, it is important to seek an opinion of a health specialist to ascertain any affliction from this cancer. Amigos, we wish you a prostate cancer free life as you apply some of the suggestions in this article into your daily life and remember we are very much available to assist you on this issue and many health matters that may be bringing you discomfort.