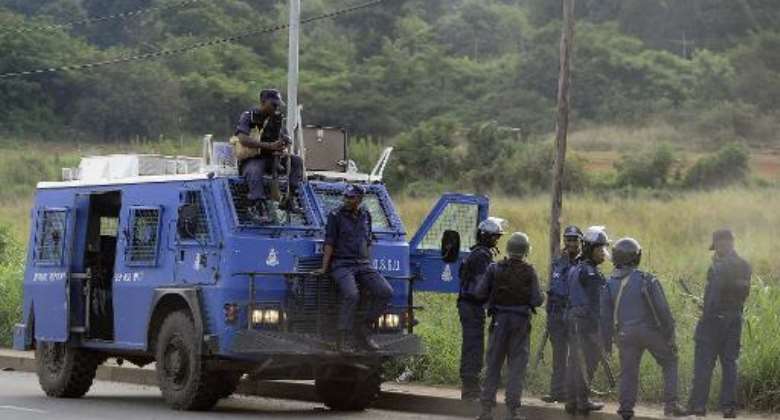 Swaziland policemen take position to disperse a group of activists, in Manzini on April 13, 2011. By Stephane de Sakutin (AFP/File)

Officers detained Mario Masuku, president of the People's United Democratic Movement (PUDEMO), as he was leaving the courtroom, according to an AFP correspondent.

"A group of our comrades are currently detained in police custody. No charge has been laid as yet," PUDEMO spokesman Themba Mabuza told AFP.

Meanwhile Swaziland Youth Congress (SWAYOCO) deputy leader Mlungisi Makhanya and 15 others were detained after protesting outside the court.

The activists clashed with police when officers detained Makhanya. The group were blocking police vans from entering the court grounds in protest at the trial of columnist Thulani Maseko and Bheki Makhubu, editor of The Nation magazine.

The pair have been charged with contempt of court over articles critical of apparent government and court abuses.

The journalists were arrested in March, released and then rearrested this month.

Police have blocked activists from attending the trial and planted plain-clothes officers in the public gallery.

The High Court dismissed an application to allow the activists to attend the trial, according to the pair's lawyer Ncamiso Manana.

Media in Swaziland operate under strict regulations, and criticism of Mswati and his government is illegal.

The trial will resume on Monday.