THE POLITICAL AND ECONOMIC DILEMMA OF AFRICA’S DEVELOPMENT; LESSON DRAWING FROM EAST ASIA 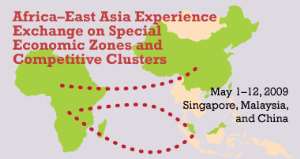 CURRENT TRENDS
Africa in recent times has become a continent of hope because of the political and economic successes. Almost all the 54 sovereign states practice democracy now which is a major boost in political development as compared to decades ago. The term development can be explained in relation to the state's total wellbeing or the wellbeing of individuals in the state. Development is the increase in total value of goods and services produced measured by Gross Domestic Product (GDP). Development can also mean the improvement in human life and social wellbeing.

Again, sustainable development is development that meets the needs of the present without compromising the ability of future generations to meet their own needs. In recent years, Africa has performed well in improving the lives of its citizens. According to the Annual Development Effectiveness Review 2013, growth in the continent's low-income countries exceeded 4.5% in 2012 and is forecast to remain at above 5.5% in the few years. Again, Africa's collective GDP reached US$ 953 while the number of middle income countries on the continent rose to 26 out of the total 54. The facts postulated above shows that, this continent is making tremendous economic gains but in our quest for development, do we need the type of industrial strategy that transformed some East Asia economies and not democracy?

DILEMMA
Democracy is accepted as the best form of governance and is Africa ready to practice this form of governance? Democracy has elements which includes a political system for choosing and replacing the government through free and fair elections. It offers an opportunity for citizens to change their leaders through ballot boxes. In a democracy, there is an active participation of the people, as citizens, in politics and civic life. Again, democracy offers an opportunity for protection of human rights of all citizens and lastly rule of law is promoted.

East Asian countries like Taiwan, South Korea, Hong Kong and Singapore in recent years are referred to as Asian tigers because of the tremendous economic gains they have made and their contribution to the world economy. A comparison is made now whether Africa should adopt the same industrial strategy that made them develop. Industrial policy is an official strategic effort to encourage the development and growth of the manufacturing sector of the economy. The government takes measures “aimed at improving the competiveness and capabilities of domestic firms and promoting structural transformation”. These policies are often considered to be interventionist as opposed to laissez-faire economics.

Industrialization has always constituted a major objective of development strategy and government policy. It has been characterized by a primary emphasis on attaining the desired macro-economic environment for industrial development and at the same time achieving the intended economic performance for a country. An industrial strategy may be pursued by government to change the structure of the economy. Eg: Import substitution, export led industrialization among others. East Asia countries placed economic development ahead of political freedom as compared to what pertained in the western countries which made democracy a top priority. To the East Asian countries, when citizens are empowered economically, they will naturally be empowered democratically.

INDUSTRIAL POLICIES
Firstly, import substitution industrialization was used in Taiwan, South Korea, Hong Kong and Singapore etc. This is an industrial policy where government makes investment in goods the government spends a lot of money importing. It is a trade and economic policy that advocates replacing foreign imports with domestic production. For instances, Hong Kong and Singapore specialized providing state of the art financial centers which generated millions of dollars for their economy.

Secondly, they pursued export-led industrialization which is a trade and economic policy aiming to speed up the industrialization process of a country by exporting goods for which the nation has a comparative advantage. East Asian countries opened up domestic markets for foreign competition in exchange for market access to other markets. South Korea and Taiwan made tremendous economic gains by investing in information technology and are now a home to giant electronic companies in the world.

Again, the East Asian countries made substantial investment in education especially technical education. Because of the abundance of natural resources in these countries, they sought to add value to the primary goods they produced. In Africa, about 62% of the population –more than 600 million young people- is below 25 years. Consequently, as sub-Saharan Africa's workforce becomes larger and better educated, there is an overwhelming potential for economic growth and development. Through the investment in education, these countries made substantial progress in adding value to their primary commodities and produced more goods for export.

POLITICAL DIMENSION
With respect to the political system adopted by East Asia, they adopted pure communism and autocratic governance. With that system of governance, there is no room for political participation. A typical example is when Taiwan was ruled by Chiang Ching-Kuo in 1970's. Under his reign, rule of law, political participation, consensus building among others was not promoted. All that he was interested in was economic development for Taiwan not democracy. Again, Singapore was ruled by Lee Kuan Yew from 1959 to 1990 under autocratic regime. The world now praises him for transforming Singapore into a developed state. This great leader pursued rigorous economic transformation and gave little room for democracy but will it be feasible in Africa?

The story is different in Africa; the continent was put under slavery and to make matters worse, colonialism by Europeans. Colonialism created structural imperialism where Africa became a primary commodity exporter to feed European industries. Africans in the mid 1950's started to agitate for power transfer and this independence fever caught up with almost every nation. In sub-Saharan Africa, Ghana was the first country to gain independence from Britain and was followed by a number of countries gaining independence and at its apex in the 1960's. The first generation African leaders ruled autocratically and to some extent failed to bring development to their people. These political events were followed a series of coup-d'états that swept through the continent. In Ghana, the first president Dr. Kwame Nkrumah was overthrown in 1966 and military government took over the nation. These events of military coup d'états stalled political and economic development on the continent.

MY POSITION
Africa currently has 54 sovereign states and making strides in political and economic development but as to how to adopt East Asia's political and economic strategies, I oppose the East Asian political system which is autocracy and support the economic strategy. Looking at the structure of the economies of most African states, we depend mostly on primary commodities. Decades ago, most states in Africa were autocratic states but we didn't see much economic growth. Mozambique, Libya, Cameroon, Gambia, Zimbabwe among others has been under autocratic regime but has not resulted in any major economic transformation.

Africa must pursue democratic governance which is referred to as the best form of governance. Early this year, African Union summit had a theme for discussion which was on how to transform agriculture on the continent but ended up talking about how to bring peace to Mali, South Sudan etc. It is about time Africans pursue democratic governance where rule of law, political participation, consensus reign. Despite all the hitches in leadership on the continent, countries like Ghana, Botswana, Mauritius, and South Africa are making tremendous gains in political reforms and democracy.

With economic strategy for Africa's development, we must invest in sectors we have comparative advantage in. The world's arable lands are found in Africa which means we have comparative advantage in agriculture. But it is unfortunate that, most people on the continent farm on subsistence basis and it is about time we make mechanized farming a priority. Despite the arable lands in Africa, we still import food from Europe, America and Asia while we can feed ourselves through investment in agriculture. For instance, Ghana spends over $600 million importing only rice whiles we can do import substitution industrialization in this sector.

Again, Africa should invest in export led growth which is investing in sectors we have comparative advantage in. With arable lands that abound on this continent, we should mechanize our agriculture which will produce more food for export for us to earn foreign exchange. In Africa, rice, corn, wheat, sorghum, millet, oil etc can be produced in large quantities for export and we must pursue aggressively export- led industrialization. Again, Africa is blessed with minerals like gold, diamond, bauxite, manganese among others and it is incumbent on us to invest in those industries. We must add value to the minerals we extract so as to boost our export earnings. Consequently, Africa has a youthful population which is a positive sign of abundant labour force. This continent must invest in education of its people especially technical and vocational education. East Asia countries in their quest for development educated its populace especially in adding value to their primary commodities.

In conclusion, in Africa's quest for development we can copy the economic strategies used by East Asia countries like import substitution industrialization, export -led growth and education among others. On the other hand, Africa has come a long way looking at our political history which was characterized by autocracy and dictatorship. There are countries in Africa doing well in the practice of democracy like Ghana, South Africa and Botswana and are still making tremendous economic gains. Democracy is the way to go in Africa because it enhances rule of law, political participation, consensus building, transparency and accountability.