US Fights Mahama Over Private Jet 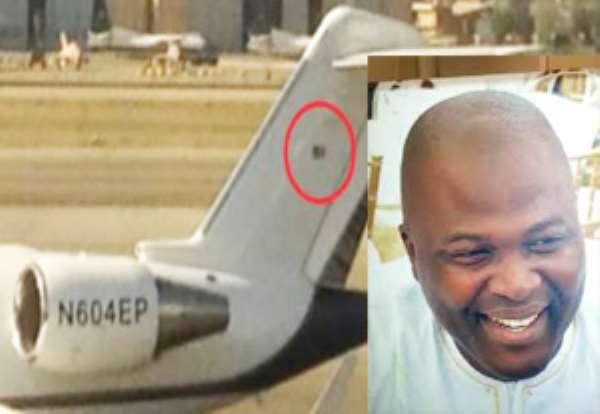 The presence in Iran of a US-registered plane belonging to business magnate Ibrahim Mahama has sparked a wave of controversies in the United States, prompting the Treasury Department to launch investigations into the matter.

Jen Psaki, the US State Department spokesperson, on Friday told international news networks that the US Treasury Department would look into the matter to determine if the Bombardier aircraft with identification number N604EP, belonging to Ibrahim Mahama's mining company, Engineers and Planners (E&P), had violated any terms of the international sanctions imposed on Iran.

'The Department of Treasury will look at this and see if there is a concern here,' Jen Psaki stated, adding that the US Treasury would determine 'if there was any violation of sanctions here — I'm not predicting there was,' she added.

The international sanctions on Iran prohibited US and other western economies from conducting business with Iran.

According to the New York Times, the plane's recent presence in Iran, a country where nearly all US business activities were prohibited, raised questions about whether current US sanctions were violated.

“The Iranian transactions and sanctions regulations prohibit the exportation of goods, services or technology directly or indirectly from the United States or by a US person to Iran and would generally prohibit US-registered aircraft from flying to Iran,” Psaki elaborated.

No official statement had been given explaining what the Ghanaian owned aircraft was doing in a volatile turf like Iran.

Attempts to reach Ibrahim Mahama, a younger brother of President John Mahama, over the weekend, hit a blank. However, a statement issued by E&P immediately after the controversial incident stated that the Ghanaian mining company had not violated any US regulations.

'The said trip was made in conformity with all international aviation laws,' the statement signed by the Executive Director of Engineers and Planners, Mr. Adi Ayitevie, read.

“The said aircraft transported a group of Ghanaian business executives to Iran and has since returned to Ghana,” it added.

The statement also disputed claims by the New York Times Newspaper that President Mahama was once transported by the said aircraft.

'We wish to also state that the President of the Republic of Ghana, His Excellency John Dramani Mahama, has never been transported by the said aircraft,' the E&P statement noted.

Officials of Engineers and Planners said the story by the New York Times was speculative, since it had not received any queries from US law enforcement agencies about international aviation rules regarding the plane.

Phantom Occupants
However, the occupant(s) of the jetliner at the time of its controversial visit had become a major subject of contradictory accounts between Iranian officials and the E&P statement.

New York Times on Friday quoted former federal officials who spoke on condition of anonymity that they 'believed that the plane has been used to transport President Mahama before.'

Originally declining to comment on the matter at the time of the breaking of the news last week by the New York Times, Russian news network, Russian Times (RT), on Sunday April 20 quoted Iran officials as saying the US-registered aircraft was carrying officials from Ghana.

'This plane was carrying a high-ranking delegation from Ghana and according to an announcement by the country's government, the jet was in possession of the US and chartered by Ghana's presidency,' Iran's Foreign Ministry Spokeswoman Marzieh Afkham said on Friday, as quoted by Press TV.

'The passengers of the plane comprised a delegation of Ghanaian officials headed by the brother of the country's president, and none of its crew was American,' the Iranian Foreign Ministry spokesperson added.

According to Iranian officials, the Ghanaian delegation visited Iran last Tuesday to follow up on agreements reached between the two states back in 2012, she said, adding that the delegation left last Thursday. However, E&P insisted that the plane was carrying businessmen on a purely business trip.

According to foreign news media, any time Iranian officials were pressed to disclose the identity of the plane's occupants, they gave a blank answer that it carried 'VIP'.

Coincidence?
According to the New York Times, the plane had a history of intercontinental travels, citing images posted on the Internet by amateur photographers who make a sport of snapping airport takeoffs and landings to chronicle flight itineraries.

'Six months before the plane was spotted on Tuesday parked at the V.I.P. section of Mehrabad Airport in Tehran, it was seen leaving a London-area airport, bound for Accra. The plane can be easily identified by the call letters on its tail engines, N604EP,' the New York Times stated on Saturday April 18.

The New York Times insisted on drawing parallels with President Mahama's travels with the movement of the controversial plane owned by his brother's company. 'One image captured the plane flying to the World Economic Forum in Davos, Switzerland, where President Mahama spoke in September. The Ghanaian president was also in London last October when the aircraft was spotted leaving there for Accra,' the New York Times stated.

Ownership
Tyler Bowron, an aviation expert at Cerretanni Aviation group in Boulder, Colorado, told Al-Monitor a Middle Eastern News network last week that the company that owns and operates the plane is called Engineers and Planners http://engplanners.com/index.php?page=about , based in Accra, Ghana.

Bank of Utah, which is listed on Federal Aviation Agency records http://flightaware.com/resources/registration/N604EP as the trustee for the 22-seat corporate jet, 'is just the trustee', Bowron said. 'They have nothing to do with it.'

The New York Times first reported Thursday on the mystery of the US 'N-registered' plane seen by the paper at Tehran's Mehrabad airport on Tuesday. The Blaze first reported http://www.nytimes.com/2014/04/18/world/middleeast/mystery-shrouds-american-plane-at-tehran-airport.html?src=twrhp Bowron's identification of the Ghana firm that owns and operates the plane. http://www.theblaze.com/stories/2014/04/18/whats-the-story-behind-this-mysterious-american-jet-spotted-in-iran-and-whos-the-vip-passenger/

A Bank of Utah spokesperson said the bank was solely acting as a trustee for the airplane's real owner.

But acquiring permission to conduct business with Iran was extremely difficult due to current US trade rules.

Bank of Utah Vice President Brett King said Thursday that he was as confused as everyone else by the plane's presence in Iran.

'We have no idea why that plane was at that airport,' King said.

He vowed that the bank would investigate the issue and try to get some answers.

'The Bank of Utah is very conservative, and located in the conservative state of Utah,' he told the New York Times. 'If there is any hint of illegal activity, we are going to find out and see whether we need to resign' as trustee.

US federal aviation records http://registry.faa.gov/aircraftinquiry/NNum_Results.aspx?NNumbertxt=604EP available to DAILY GUIDE indeed showed the trusteeship of the Bank of Utah.

Officials at Bank of Utah, which is listed as a trustee for over 1,000 various types of aircraft, said the matter was between the owners of the aircraft and US government officials to resolve.

Scott Parkinson, senior vice president for Marketing and Communication with the Ogden-based bank, said the financial institution was aware of the plane in Iran but was not investigating at this point.

“As far as the legality of that, flying into that country, that's really between the beneficiary and the Department of State, and maybe the FAA,” Parkinson said, as quoted by AP.