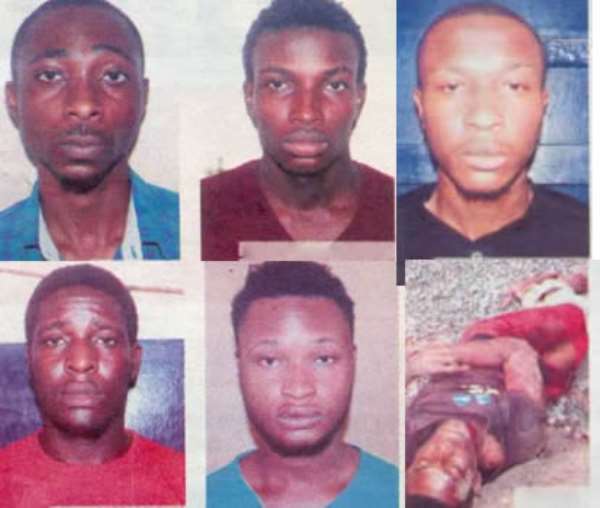 Five foreign  students of die University of Cape Coast (UCC) have been apprehended by the police over the gruesome murder of their mate, Godwin Chukudi Ayogu, 19, a level 200 student of the school.

All five, being friends of the deceased, were arrested upon thorough investigations by the police.

They are currently in the custody of the Homicide Unit of the Police Criminal Investigations Department, Headquar­ters, Accra.

The Gruesome Murder
Briefing the media, Commissioner of Police (COP) Prosper Agblorh, Director-General in charge of Criminal Investigations Department, said die body of the deceased, Godwin Chukwudi Ayogu, was discovered at Amamoma, an outskirts of the Cape Coast university campus, with multiple stab wounds all over the body.

When the body was discovered, he had both hands and legs tied with a white piece of cloth, his throat slashed and his intestines gushed out, according to COP Agblorh.

The body was deposit­ed at the regional hospital morgue, Cape Coast, for preservation.

Police preliminary investigations at the scene revealed that the deceased was killed somewhere else and the body dumped at the outskirts of the univer­sity.

COP Agblorh said tyre-marks of the vehicle which was used for com­mitting the heinous act was found beside the body and was extracted by the police for investiga­tions.

On February 21, 2G14, a post-mortem was performed on die body by Dc Patrick Kafui Akakpo of fee regional hospital and mff&esgp, the cause of death as stab wounds in the heart and multiple stab wounds^;

Investigations And Findings
GOP Prosper Agblorh said the Homicide Unit was charged to take over investi­gations. It was then revealed that suspect Ogunsanyo  Abayomi, a friend of the deceased who Iived beyond his means, bor­rowed an unspecified amount of money from the deceased to add up to his, so he could pay his school fees.

He promised to pay bade within die shortest time possible, but failed to do so.

Having failed to pay the money owed to the deceased, the suspect went to the United Kingdom, promising to pay back when he returned.

On his return, however, Abayomi again failed to honour the promise and went ahead to rent a two-bedroom apartment.

Godwin, until his death, complained about the conduct and actions of his friend (Abayomi) to other friends on campus, adding that instead of paying his school fees to move to the next level of the educa­tional rung, he lent the money given him by his parents to Abayomi.

On February 18,2014 - a day before his death - the deceased was seen in the com­pany of Abayomi and Timileyin Jimoh at apartment to demand his money.

However, Chukudi went missing until his body was discovered the following morning.

Other Suspects
Further investigations disclosed that Obi Mnaetochi Brendan Dozumba was also a hostel mate and one-time course mate of  the deceased.

During a programme at the university campus, Chukudi introduced his girlfriend to suspect Brendan who allegedly became interested in the lady and went on to propose love to her. The two were alleged to ave started dating secretly.

When the secret love affair between Brendan and the lady was discovered by  the deceased, a heated argument allegedly ensued and the relationsnip between the two friends turned sour.

Investigations revealed that amongst the suspect, it was only Jimoh Oluwato- biloba Timileyin, who had a saloon car with Togo registration number 5227-AO on campus.

When the vehicle was impounded, the tyres marched with the tyre-marks found at the place die deceased was dumped.

Upon interrogation Jimoh denied hav­ing moved the car or lending it to anybody the night the body was found.

However, according to police investigation, Abayomi drove the car late that night.

When the news about the death of Godwin win broke out, suspects Ogunsanyo Abayomi, Oti Uchechukwu Chijioke, Jimoh Oluwatobiloba Timileyin and Isaac Ifidon, left the campus for an undisclosed destina­tion, only to resurface later.

This action, according to COP Agblorh, confirmed the suspicion that the suspects had a hand in the murder of the deceased.

He said investigations were still ongo­ing.