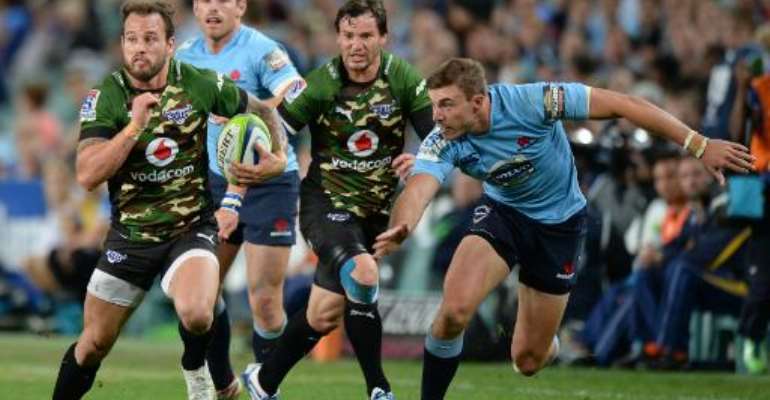 Sydney (AFP) - The Coastal Sharks opened a six-point break at the top of Super Rugby with a South African derby win as champions Waikato Chiefs lost narrowly at home this weekend.

Australia's ACT Brumbies remain in second place on 25 points despite their weekend bye, ahead on points differential over the Chiefs.

Back-to-back champions Waikato were nudged out 18-17 by the Canterbury Crusaders in a New Zealand cliffhanger in Hamilton.

The New South Wales Waratahs leapfrogged Western Force to fourth on the standings following a hard-fought 19-12 win over the Northern Bulls in Sydney.

Western Force's five-match winning run came to an end following a 22-16 defeat to the Rebels in Melbourne.

The Wellington Hurricanes improved to seventh just outside the play-off places with a 39-20 win over the Auckland Blues in Wellington.

In the weekend's other game, the Western Stormers scored two tries with 14 men to defeat the Golden Lions 18-3 in Cape Town and end a five-match losing streak.

The table-toppers were four points ahead with nine minutes left when Deysel touched down at a ruck and Francois Steyn converted to seal the victory.

The home side got on top territorially in the second half with their scrum working effectively and Steyn made the Cheetahs pay for conceding penalties.

Colin Slade kicked the Crusaders to a tight win over the Chiefs in a physically demanding clash between New Zealand's two glamour Super 15 sides.

It is the second loss of the year for the Chiefs but they remain at the head of the New Zealand conference three points clear of the fast-charging Crusaders.

Slade kicked all of the Crusaders points, with six penalties as they turned around a 9-17 deficit at half-time to bank their fifth win from eight matches.

An Israel Folau try in the opening 28 seconds proved the difference as the Waratahs ended a nine-year losing sequence against the Bulls.

Folau scored his ninth try of the season on his return from a throat injury to propel the Waratahs to a rugged victory in Sydney.

The Waratahs, watched by the Duke and Duchess of Cambridge, ended a losing eight-match run against the Bulls in what was their first win over the triple Super Rugby champions since 2005.

The win took the Waratahs to within one point of the ACT Brumbies at the top of the Australian conference, while the Bulls remained second behind the Coastal Sharks in the South African conference.

Fullback Jason Woodward scored 17 points from five penalties and a conversion as the Rebels held on to nudge out the Force after both teams scored a try each in a dour contest.

In Wellington, the Hurricanes trailed 13-17 at half-time but they took control in the opening 10 minutes of the second half with a converted try, down to 14 men with hooker Dane Coles in the sin bin.

It set up the Hurricanes' third consecutive win and kept them in touch with the competition leaders after turning around a disastrous start to the year in which they won only one of their first five outings.

The Stormers, showing a greater appetite for keeping the ball in hand than in previous games, built an 18-point first-half lead and restricted the Lions to just three points after the break in their match at Newlands.