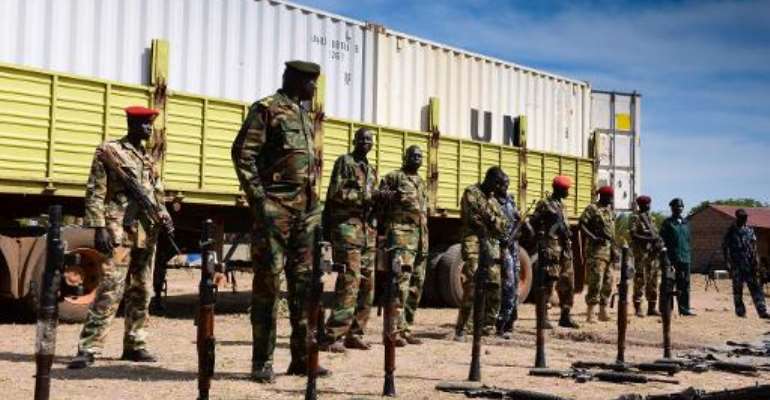 South Sudanese security forces stand next to weapons intercepted from a UN peacekeeping mission in Rumbek on March 8, 2014. By Charles Lomodong (AFP)

Juba (AFP) - South Sudan's army said Saturday they had "lost communication" with commanders battling rebels in a key oil state where rebels have seized a major town, amid a worsening conflict engulfing the young nation.

However, army spokesman Malaak Ayuen said the situation was "all calm" in the flashpoint town of Bor, where at least 58 people were killed and more than 100 others wounded when gunmen stormed a UN base on Thursday.

The UN Security Council called the attack on the camp -- where thousands of civilians were sheltering -- an "outrage" that may "constitute a war crime".

Among the dead were children, and the UN has warned that the death toll could increase.

In the north of the country in the troubled oil-state of Unity, the army is fighting rebels loyal to sacked vice-president Riek Machar, after the insurgents launched a renewed offensive targeting the young nation's key oil fields.

Rebels said the army had fled Bentiu in disarray and had seized large amounts of military equipment including artillery, but the army dismissed the reports and said it was staging a counterattack.

However, military headquarters in the capital Juba said they had not been able to get through to troops fighting on the ground since Thursday.

"There are is a problem of lost communication...the telephones are not going through," Ayuen said.

It was not immediatly clear what has happened to the government force in Unity state, but rebels are reportedly extending attacks, including in the Melut and Renk areas of Upper Nile, another oil-producing state.

The conflict in South Sudan, which only won independence from Sudan in 2011 and is the world's youngest nation, has left thousands dead and forced around a million people to flee their homes.