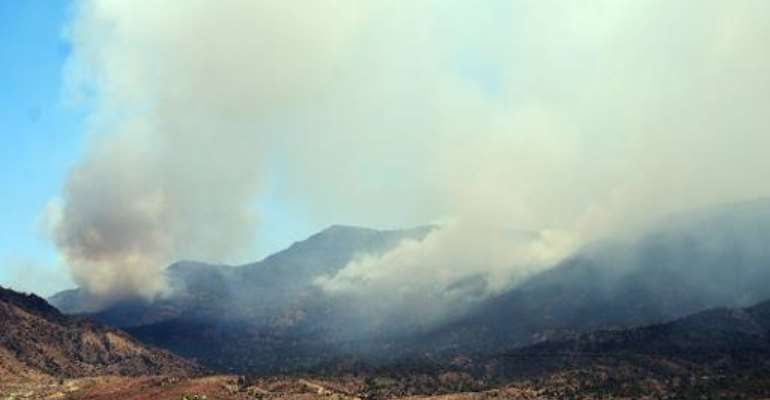 Smoke is seen billowing from Mount Chaambi during a Tunisian forces air operation against Islamist militants near the Algerian border on August 2, 2013. By Abderrazek Khlifi (AFP/File)

Tunis (AFP) - Tunisia faces a growing jihadist threat in the mountainous region near the border with Algeria where several soldiers have been killed battling militant Islamists, the defence ministry said on Thursday.

The presidency on Wednesday declared Mount Chaambi, as well as some surrounding areas including the mountains of Sammama, Salloum and Mghilla, "zones closed for military operations".

Defence ministry spokesman Toufik Rahmouni said on Thursday the decision was prompted by the "growing number of threats made by terrorist organisations based in the area" and was designed to contain and limit their activities.

Since late 2012, security forces have been battling dozens of militants hiding in the Mount Chaambi region just a few kilometres (miles) from the border.

In July, eight soldiers were killed in an ambush in the area, and others have died or been wounded in explosions caused by improvised landmines.

"We've noticed that some of the terrorists are no longer just holed up in Mount Chaambi but are travelling to mountains nearby," Rahmouni told reporters, without giving details about the number of militants involved.

The ministry spokesman said the security operations under way in the region were taking place with the cooperation of the Algerian army, and were also targeting organised crime networks trafficking weapons and drugs.

The Tunisian army has repeatedly sought to eradicate the threat posed by jihadists in its western border region, whom the authorities say are linked to Al-Qaeda, launching a major air and ground operation last August.