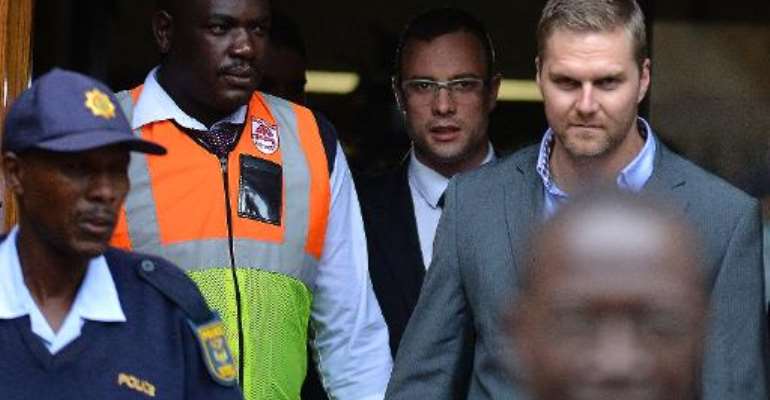 Pretoria (AFP) - A star pathologist hired by Oscar Pistorius told AFP on Thursday he will not testify at the athlete's murder trial, another blow for his defence after a week of savage cross-examination.

Perumal has appeared in many high-profile cases in South Africa, where a private pathologist can cost upwards of $2,000 a day.

He was hired by Pistorius in time to attend the model's autopsy.

When asked if he would testify, the Durban-based pathologist told AFP "no, ma'am."

"I think you're aware that I can't say anything right now."

Perumal's absence from the witness box casts further doubt on the believability of Pistorius's story, after a week which saw the Paralympic star and one of his hired experts torn to shreds by prosecutor Gerrie Nel.

Nel drew a number of concessions during his cross-examination of Pistorius, who was at times argumentative, evasive and emotional on the witness stand.

On Thursday Nel hammered defence expert Roger Dixon, a forensic geologist who testified on key elements of the Pistorius crime scene, including the order of the bullets that hit Steenkamp.

Nel, a legal veteran known as the "Pit Bull", derided the quality of the expert's testimony, accusing him of "misleading" the court.

"I am not trying to mislead the court," said Dixon.

Perumal's unusual decision not to testify has attracted the attention of his fellow forensic pathologists.

"I have heard that it might be because he refused to amend his version," said Steve Naidoo, a Durban-based private forensic pathologist. "If so, and if Dr Perumal is not willing to twist the truth, then it's to his tremendous credit."

Naidoo, who said he has not talked directly to Perumal about the Pistorius case, said "an expert forensic pathologist, independent or otherwise, must remember his function is firstly toward the court."

If an expert tailors his version, then he risks ruining his credibility, said Naidoo, who worked as a pathologist for the state for 28 years before starting his private practise.

"That would be a hired gun approach," said Naidoo, "and you've got to avoid that."

Pistorius has pleaded not guilty to intentionally killing Steenkamp, a 29-year-old law graduate and aspiring reality television star, saying he mistook her for an intruder in his upmarket Pretoria villa.

The state alleges Pistorius and Steenkamp were arguing and that the 27-year-old Olympian and Paralympic gold medallist shot his girlfriend in a fit of rage.

Yet state pathologist Gert Saayman said vegetable matter in Steenkamp's stomach suggested she ate around two hours prior to her death at 3:17 am, a finding that conflicts with Pistorius's version of events that the couple were peacefully asleep at that time.

"To the best of my recollection he was in agreement," said Saayman about Perumal.

"We must be, so to speak, on the same page before we leave the autopsy room," he said. "We don't have the opportunity to go back."

Instead of Perumal, the defence called Jan Botha, a former state pathologist who has carried out approximately 25,000 autopsies.

Botha disputed Saayman's conclusion, saying that determining the time of death through gastric emptying is guesswork, calling it a "highly controversial and inexact science".

In an interview with local media last year, Perumal outlined his work philosophically, saying he is first and foremost a scientist.

"It doesn't matter what the case is, if it is big or small," he told the Mercury, a newspaper in Durban. "What is most rewarding is when the truth is presented and justice is done."

Pistorius, whose legs were amputated below the knee after he was born without calf bones, gained worldwide fame for running on two carbon fibre blades at the Paralympics and 2012 London Olympics.

The trial has been adjourned until May 5.