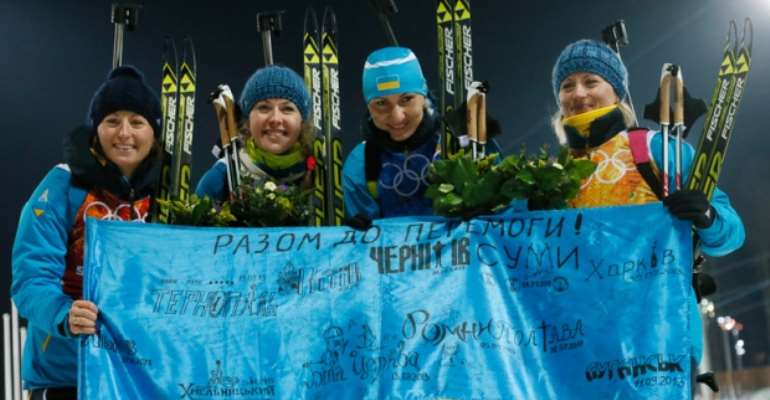 With the crisis in Ukraine escalating by the day, the prospect of the Winter Olympics going to the former Soviet republic seems hard to imagine. Yet, the western Ukrainian city of Lviv hasn't given up on its bid for the 2022 Games.

Lviv remains among the five contenders in what is turning into a very unstable race, vying with Almaty, Kazakhstan; Beijing; Krakow, Poland; and Oslo.

But the Lviv bid is in a state of limbo amid Ukraine's burgeoning tensions with Russia and pending presidential elections on May 25, a result that could determine whether the candidacy is dropped or goes forward to the IOC's short-list decision in July.

"Currently our dream is on hold due to the current circumstances in Ukraine and at least until after the presidential elections," bid chief executive Sergei Goncharov told The Associated Press. "We have minimized our operations and suspended promotional and media activities until the solution of the current challenges that Ukraine faces."

Goncharov said the International Olympic Committee has been supportive of Lviv throughout the Ukraine turmoil.

"As of now we have agreed with the IOC that we will sit down with them as soon as possible to decide whether we are still able to fulfil our commitments and to realize our dream of hosting the Olympic Winter Games," Goncharov said. "The dream is now more important than ever."

Tensions in Ukraine have increased since the overthrow of pro-Russian President Viktor Yanukovych and Russia's annexation of the Crimean peninsula. A well-armed, Russia-backed insurgency has sowed chaos in eastern Ukraine in the past weeks, with militants seizing buildings in more than 10 towns.

Three pro-Russian militants were killed when Ukrainian troops repelled an attack on a national base in the Black Sea port of Mairupo late Wednesday.

"Once the elections are over we will sit down with our main stakeholders and the president to analyze whether at this point we can fulfil our commitments and expectations that come with organizing Olympic Games," Goncharov said in an interview on the sidelines of last week's SportAccord convention in Belek, Turkey.

"We do not want to be running a bid where we cannot deliver."

Lviv, a city of about 700,000 people, is located in western Ukraine and is closely linked with the West, rather than Moscow. It is considered one of the main cultural and tourist centres of Ukraine.

"We remain convinced of the strong economic and political impact of holding the games," Goncharov said. "It would help our integration process in Europe and the world which is important at the moment."

Lviv is not the only bid facing uncertainty.
Oslo, which hosted the 1952 Winter Games, has not yet secured government financial guarantees and opinion polls show a large percentage of Norwegians oppose the project.

Krakow was rocked by last weekend's resignation of bid leader Jagna Marczulajtis-Walczak following media allegations that her husband offered money to journalists in return for favourable stories. Also, the bid faces a referendum among Krakow voters on May 25.

The five bid cities submitted their applicant files to the IOC last month and will report by video conference to IOC officials on May 8.

The IOC executive board will meet in Lausanne, Switzerland, from July 8-9 to decide which cities make the list of finalists. The IOC could keep all five or cut the field to as few as two. The full IOC will select the host city on July 31, 2015, in Kuala Lumpur, Malaysia.

The IOC will need clarity on the Ukraine situation before its July meeting.

"They must have an honest and clear answer from us on our situation," Goncharov said. "We will consult with them in taking this decision."

Goncharov kept a low profile in Belek, meeting quietly with delegates behind the scenes. His message was restrained.

"When speaking to people, it's clear I cannot promote the bid too much because everybody understands that we have other challenges that are more important right now," he said. "I'm being honest with everybody."