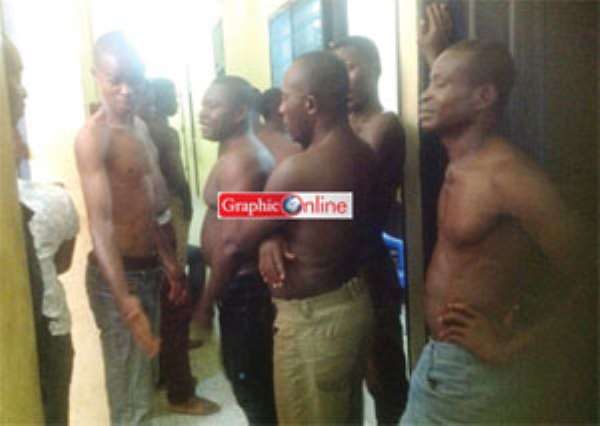 The police have arrested 11 suspected middlemen or 'goro boys' for allegedly issuing fake vehicle registration documents, roadworthy stickers and driver's licences to customers of the Driver and Vehicle Licensing Authority (DVLA) at Weija in Accra.

The suspects, including a lady, are in the custody of the Weija District Police.

The police carried out the swoop following a request by the management of the Weija DVLA yesterday.

The DVLA was encouraged to call for the swoop following revelations of underhand dealings at DVLA offices by Tiger Eye investigations carried out in partnership with the Graphic Communications Group Limited (GCGL).

When the Daily Graphic visited the Weija DVLA yesterday, some people suspected to be 'goro boys' were heard discussing the arrest of their colleagues.

While some of them were talking about the 'heat' the exercise had brought to the area, others were heard telling their colleagues that they had closed for the day. Weija Police

The Second-in-Command at the Weija District Police Station, Assistant Superintendent of Police (ASP) Mr Isaac Ayittey Quaye, told the Daily Graphic that the police would screen the suspects and those found culpable put before court.

He said the police would sustain the exercise by organising at least two swoops in a month to clear the Weija DVLA office of 'goro boys'.

Meanwhile, Mr Quaye said one of the suspected 'goro boys', known only as Taller, had escaped arrest and indicated the resolve of the police to re-arrest him. DVLA management

The Manager of the Weija DVLA office, Mr Cyril Dellings-Nyasorgbor, said the activities of the 'goro boys' hampered the work of the DVLA.

For instance, he said, some of them posed as staff members of the DVLA and intercepted vehicle registration and licensing documents from unsuspecting customers.

He said the 'goro boys' had their own machines which they used to prepare and print out fake vehicle registration documents, roadworthy stickers and driver's licences to customers.

Mr Dellings-Nyasorgbor refuted allegations that some officers of the DVLA collaborated with the 'goro boys' to prepare fictitious documents for customers. No delay

He disagreed with the suggestion that some customers sought the assistance of the 'goro boys' because of the delay in acquiring vehicle registration documents and driver's licences.

To facilitate the documentation process, he said, the DVLA had introduced an online registration system for customers to access and fill their application forms.

He said the DVLA processed application forms within 15 minutes. Caution

Mr Dellings-Nyasorgbor cautioned the public against seeking assistance from 'goro boys', since they risked getting fake documents and licences.

Rather, he asked customers to go directly to DVLA officers, including managers, to process their documents. Recall

Undercover investigations at the DVLA established a licence racketeering network of officials and some deviants who issue licences to unqualified individuals for personal monetary gain.

The 12-month investigation, which saw the undercover team of Tiger Eye visit some regional offices of the DVLA, established the breakdown of the system at the DVLA, making it easy for the team to procure licences for mentally and physically challenged persons, market women, expatriates, among other individuals, without going through the usual rigorous process of acquiring a licence.

Meanwhile, Salomey Appiah reports that activities of the 'goro boys' at the DVLA office near the 37 Military Hospital have not abated, despite the undercover investigations by Tiger Eye.

When the  Daily Graphic  visited the premises Wednesday, business was ongoing as usual. Quite a number of the middlemen were seen on the premises of the DVLA.

They were recognised by the moves they made on clients who visited the premises to seek one service or another.

One of the 'goro boys' who approached this reporter when she was going to pick a form for a new licence told her that she would not have to enter any office for any long process if she was willing to pay GH¢600.

'You only need to provide me with your details and the money and I will get your licence for you in less than a month,' he said.

He said the process was expensive because he had to pay up some officials at the DVLA to get the job done within a short while, adding that the applicant would not have to take any examination as required.

Another middleman, who gave his name only as K.B., also demanded GH¢500 to procure a licence for me as quickly as possible.

In an interview, the Head of Public Relations at the DVLA, Mr Kweku Darko Aferi, said the DVLA would hold a press conference to address all issues concerning the Tiger Eye investigations.