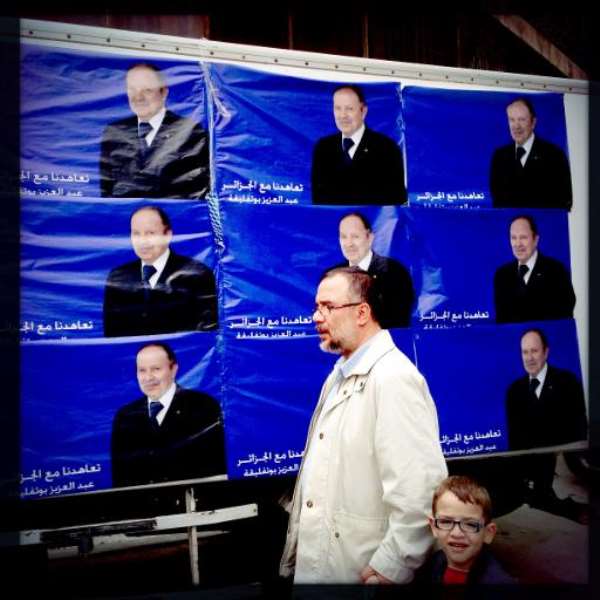 Algiers (AFP) - Algerians weighed their options ahead of Thursday's election, with President Abdelaziz Bouteflika urging a large turnout as he eyes a fourth term, his main rival warning of fraud and others demanding a boycott.

More than 260,000 police have deployed across the country to guarantee security in the 50,000 polling booths set up to accommodate the 23 million Algerians eligible to vote in the presidential race, which is being contest by six candidates.

The ailing 77-year-old Bouteflika is widely expected to clinch a fourth term, but he faces the damaging possibility of low voter turnout, with protesters calling on Algerians to snub the poll and disrupting rallies during the election campaign.

Late on Tuesday, Bouteflika urged "all citizens to participate in the presidential election", and saying those who abstained were choosing to "remain on the fringes of the nation".

His message was carried by national media, with the president rarely appearing in public due to his poor health, which has even prevented him from taking to the campaign trail.

Interior Minister Tayeb Belaiz insisted that "all the conditions of transparency, neutrality and security have been put in place for the success of this election."

A coalition of opposition parties, including the Islamist Movement for the Society of Peace (MSP) and the secular Rally for Culture and Democracy (RCD), have called on voters to shun an election they say is a "sham".

Youth protest group Barakat (Enough in Arabic), founded just two months ago specifically to oppose the president's bid for a fourth term, has described the vote as a "non-event".

Participation is set to be a key issue on Thursday.

Officially 74.11 percent of the electorate voted in the 2009 presidential poll, which Bouteflika won by a landslide after changing the constitution to allow himself to run for more than two terms. But a leaked US diplomatic cable estimated the turnout at between 25 and 30 percent.

A number of rallies were disrupted in the last week of the election campaign, some of them by Berber protesters in the traditionally restive Kabylie region backing calls for a boycott.

On Tuesday, thousands responded to the RCD's call for a protest march in Tizi Ouzou, the Kabylie capital, demanding the promotion of the Berber language Tamazight, rejecting the election and denouncing the regime.

The protesters waved Berber flags and chanted slogans such as "ruling assassin!" and "no to the election masquerade!" the independent daily El Watan reported.

Abderezak Mokri, who heads the Movement for the Society of Peace -- the Algerian branch of the Muslim Brotherhood -- has insisted Bouteflika could only win the election by rigging it.

The president's main rival, Ali Benflis, has repeatedly warned of fraud during the election campaign, describing it as his "main adversary" in Thursday's vote.

The former prime minister ran against and was heavily defeated by Bouteflika in 2004, alleging that his adversary's landslide victory then was rigged.

Benflis's repeated comments about the likelihood of electoral fraud have drawn angry comments from the largely absent president, who has been represented by seven high-profile allies during the campaign.

Without naming him, Bouteflika accused his rival of inciting violence, sedition and even "terrorism via the television", in meetings with two visiting dignitaries, including Spanish Foreign Minister Jose Manuel Marcia-Margallo.

The hostile war of words between the election front-runners has dominated the run-up to the election, with Benflis telling reporters on Tuesday that fraud was his "enemy," saying it was "immoral and degrading, and dishonours all those who resort to it."

He warned that he would "not keep quiet" if the election is rigged, and he said he had an "army" of people in place to monitor the poll "consisting of 60,000 people, most of them young men and women armed to the teeth with conviction."

Bouteflika's supporters have emphasised his role in ending Algeria's "black decade" of civil war, in which an estimated 200,000 people were killed.