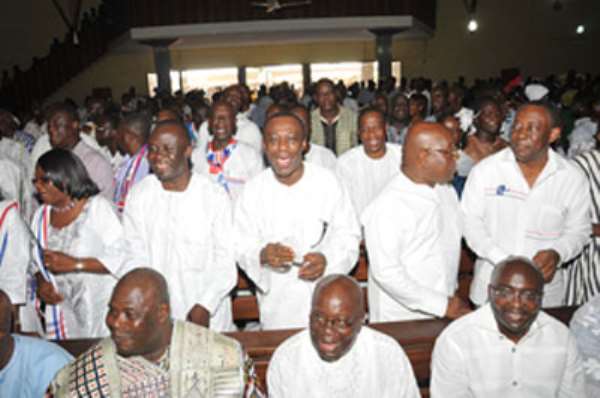 According to party pundits, this has shamed the detractors of the party who hitherto envisaged violence on account of the bickering that characterized the campaigns, the controversy that surrounded the vetting of some candidates and the protest against the ground rules for the Conference by a group of people in the NPP.

During the balloting, contestants were seen heartily exchanging pleasantries - a move that apparently communicated to their supporters that they were not enemies but brothers and sisters who were exercising their democratic rights.

The general atmosphere at the Tamale Sports Stadium could be likened to a soiree, though some supporters of the various aspirants indicated that they were tensed up, considering what had gone on in the media prior to the Congress date.

Northern Regional Communications Director of the party and member of the Local Organizing Committee, Mohammed Abdul-Kudus, told DAILY GUIDE that the various camps that existed before the elections had duly been dissolved, indicating that the NPP would become stronger and a more formidable force to reckon with.

He urged supporters of both defeated and victorious candidates to put the April 12 happening behind them and redirect their energies towards preparing for a resounding victory in 2016 as touched upon by the newly elected National Chairman, Mr. Paul Afoko.

Elated Mr. Daniel Bugri Naabu, Northern Regional Chairman of the NPP, admitted that a few challenges were encountered during the hosting of the Tamale Conference, but said the success story had outweighed those challenges.

He expressed the hope that the new crop of leaders would not depart from their entrusted duty of seeing to it that the party wins back power and redeem Ghanaians from the shackles of poverty. About 5,265 delegates from 273 constituencies throughout the country converged at the Tamale Sports Stadium to vote for 44 individuals to occupy ten positions.

At the end of the exercise, Mr. Paul Afoko emerged Chairman, polling 2,032 valid votes to beat his closest challenger, Stephen Ntim, who polled 1,500 votes. Incumbent Chairman, Jake Obetsebi-Lamptey, who was seeking a re-election, was consoled with 66 of the total votes cast, while his 1 st Vice Chairman, Fred Oware, garnered 1,135 votes.

Esther Ofori also lost the National Treasurer position to Kwabena Abankwa Yeboah, who had 2,483 votes as against 503 votes for the incumbent.

Freddy Blay, Sammy Crabbe and FF Antoh were voted the First, Second and Third Vice Chairmen of the party respectively.