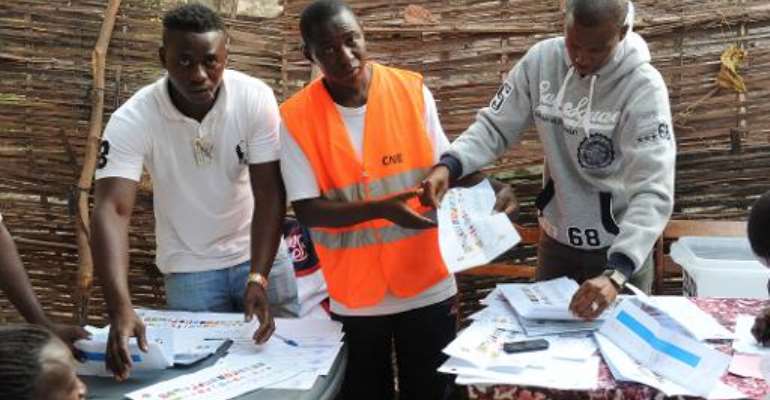 Election officials count ballots at a polling station in Bissau, Guinea-Bissau during national elections on April 13, 2014. By Seyllou (AFP/File)

Bissau (AFP) - The people of Guinea-Bissau have voted in large numbers, election officials and analysts said Monday, as the country seeks to turn the page on years of political instability and military violence.

Voters went to the polls on Sunday in the first presidential and parliamentary polls in the west African nation since a military coup in 2012.

"The numbers are positive. Taking into account the voter turnout in the various polling stations, participation would exceed 70 percent," the commission's president, Augusto Mendes, told reporters.

He said the commission hoped to publish official results from Wednesday, but if confirmed, the figure would be well in excess of the turnout in the most recent presidential votes in 2009 and 2012, which were around 60 percent.

The polls are the first since a former army chief of staff agreed in 2012 to hand power to a civilian transitional regime.

But Guinea-Bissau has seen four decades of chaos, marked by a series of mutinies since the west African nation won independence from Portugal, and commentators have called for the new regime to finally bring the military into line.

In recent years, the country has been plagued by corruption and drugs, and since the latest coup, has been stagnating under the rule of a transitional government backed by the all-powerful military.

Chronic volatility has fanned poverty in the country of 1.6 million people, which has few resources other than cashew nuts and fish.

The anaemic economy has fuelled corruption, but also attracted South American drug cartels which have turned it into a hub of cocaine trafficking for west Africa.

Thirteen politicians have been seeking to convince the people of Guinea-Bissau that they can stand up to the generals and reform the armed forces as the new president, while 15 parties fielded candidates for parliamentary seats.

Among the presidential hopefuls are political heavyweights such as former finance minister Jose Mario Vaz, and Abel Incada, a member of the Party for Social Renewal of former president Kumba Yala, who died earlier this month.

The dark horse, however, could be 50-year-old independent candidate Paulo Gomes, an unusual proposition in a scene hitherto dominated by political grandees who made their names during the war of independence.

The African Party for the Independence of Guinea-Bissau and Cape Verde (PAIGC), which led the 1963-74 war of independence against Portugal, is widely expected to win the parliamentary polls, but has called on supporters to refrain from holding demonstrations before the official announcement of the results.

Vaz, its presidential candidate, is also likely to be part of a second round run-off scheduled for May 18.

The army had backed Nuno Gomes Nabiam, a civil aviation engineer and an ally of the former president.

AFP correspondents found large queues in the polling stations they visited on Sunday.

Vincent Foucher, an analyst at the International Crisis Group (ICG), said the turnout "showed that people said 'no' to military coups" and "that there is a real hope to see new people leading the country".

But voters have voiced fears that the country is not immune from another coup, with some fearing further unrest after the publication of results if the winning candidate is not acceptable to the army.