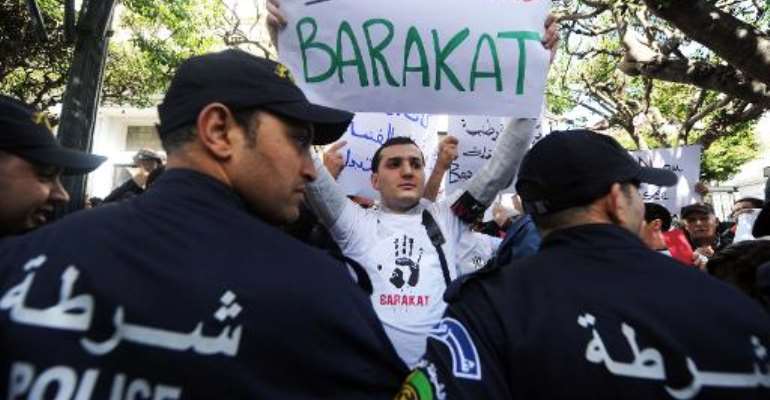 Algerian police stand guard as protesters demonstrate against Algeria's current PresidentAbdelaziz Bouteflika running for a fourth term in the April 17 elections, outside the central school in Algiers on March 27, 2014. By Farouk Batiche (AFP/File)

London (AFP) - Amnesty International accused the authorities in Algeria on Monday of silencing critics and stepping up curbs on freedom of expression in the run-up to its presidential election this week.

"Mounting curbs on freedom of expression in the run-up to Algeria's upcoming elections underscore disturbing shortcomings in the country's overall human rights record," it said.

"Moves to silence critics and quash social unrest are at the forefront of a number of human rights concerns," Amnesty said ahead of Thursday's election.

"Algerian authorities' strategy has been to nip in the bud any attempt to challenge them or their record," Nicola Duckworth, Amnesty's senior research director, said in a statement.

"With the upcoming elections, they are up scaling the clampdown and showing they will not tolerate public criticism at any level," she said.

The London-based organisation said: "A lack of open debate and restrictions on the right to criticise or protest to express social grievances or political demands cast doubt" over the polls.

Final campaign rallies were held on Sunday, with President Abdelaziz Bouteflika running for re-election in a field of six candidates, with former premier Ali Benflis his only real rival.

The 77-year-old Bouteflika, despite ailing health and not even appearing in person on the campaign trail, remains favourite to win a fourth term.

Amnesty noted that Algeria, which was locked in a bloody civil war in the 1990s, lifted a state of emergency in 2011, "yet restrictions continue to be imposed on freedom of expression, association and assembly."

"Although it is an oil-rich country, social and economic unrest fuelled by corruption, the rising costs of living, high unemployment and lack of access to housing has continued," it said.

Amnesty said the authorities had "largely responded to such protests by forcibly dispersing them, as well as harassing and arresting demonstrators and trade union activists."

"The authorities continue to target Algerians, including journalists who stray from the official, pro-Bouteflika narrative," it said.

The wife of a journalist who had covered opposition protests was "assaulted by three individuals in plain clothes believed to be members of the security forces," Amnesty said.

"They reportedly threatened her at gunpoint and demanded that her husband stop criticising the authorities on Facebook, before scalding her with hot water," it said, without giving names.

Amnesty also referred to the closure last month of a private television station, Al-Atlas TV, raided by security forces after criticising the authorities in its broadcasts.

“Attacking a private television station simply because it dared to broadcast a different view is a reprehensible attack on freedom of expression,” said Duckworth.