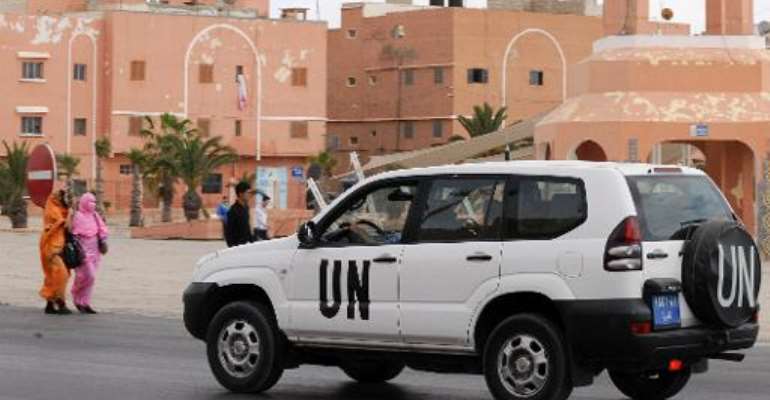 A United Nations car drives past the Mechouar square on May 14, 2013 in Laayoune, the capital of Moroccan-controlled Western Sahara. By Fadel Senna (AFP/File)

Rabat (AFP) - Morocco's King Mohamed VI on Saturday warned UN chief Ban Ki-moon over "dangerous options" in the Western Sahara, ahead of a Security Council vote on the disputed territory.

The UN Security Council is due to vote on April 23 to renew the mandate of its peacekeeping mission in the Western Sahara, annexed by Morocco in the 1970s.

He stressed the need to "preserve the parameters of negotiation as defined by the Security Council," the palace said in a statement quoted by official news agency MAP.

The king called for the UN role in the Western Sahara to remain unchanged, avoiding "biased approaches" and "perilous options".

The telephone call came after Ban called on Thursday for "sustained, independent and impartial" monitoring of human rights in the disputed territory.

Washington sought last year to task the peacekeeping force, known as MINURSO, with human rights monitoring in Western Sahara, an unexpected move fiercely opposed by Morocco, which controls most of the territory and is highly sensitive to criticism of its policies there.

Rabat launched a lobbying campaign and had the proposal dropped, with the final resolution calling instead for "the promotion and protection of human rights."

A diplomatic source in Rabat said the king's message was aimed at "anticipating possible slip-ups and any dangerous scenario for the process."