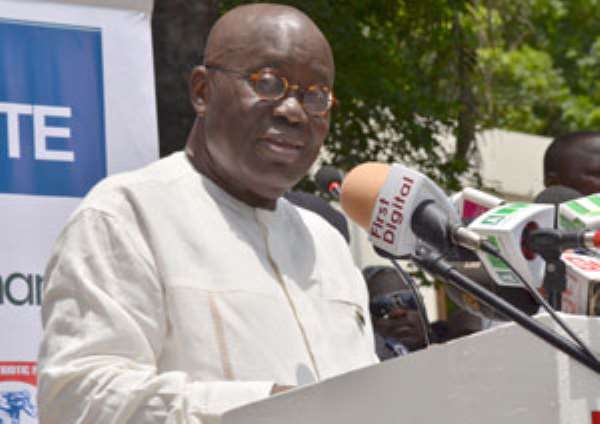 'Fellow members and delegates of the New Patriotic Party, this weekend marks an important milestone in the history and future of our great Party. For the second time at our Party's National Delegates' Conference, over 5,000 delegates will gather at the Tamale Sports Stadium this Saturday to elect national officers to steer the affairs of the party for a four-year term. No other party in our country has been anywhere near as bold in extending power to its rank and file, and I expect none will do so in the foreseeable future,' he emphasized

He reminded the delegates that 'Our task in Tamale, on April 12, 2014, is simple but critical: to choose a team of capable national officers who will lead us, as a united force, to recapture power in the 2016 general elections. The NPP rank and file deserve a leadership which will provide, with urgency, a clear and credible strategic plan for achieving this purpose'.

Nana reminded the party loyalists of the achievements of the NPP over the last four months, under challenging conditions, to hold across the length and breadth of the country, nearly 26,000 democratic elections to choose some 140,000 officers to prosecute our 2016 campaign.

He noted that in spite of the challenges, the high level of participation, energy, zeal and camaraderie that these series of elections generated among our party activists across the country should leave the nation in no doubt that the NPP is coming back - stronger, more united, with a highly motivated grassroots organisation.

'In this regard, I respectfully appeal to all delegates to vote for efficient candidates, who can collectively enhance the image and fortunes of the party in every region of the land.

'In the well-known spirit of our party's democratic credentials, let us have peaceful, free and fair elections. All well-meaning party members wish to see the successes that we chalked in the polling station, constituency and regional elections repeated at this weekend's National Delegates' Conference. And, further, that, in line with our tradition, both winners and losers come together after the elections to promote the unity and fortunes of our party. We expect from the elected team two things: ensuring the unity of the party and leading us to victory in 2016, Nana Addo charged.