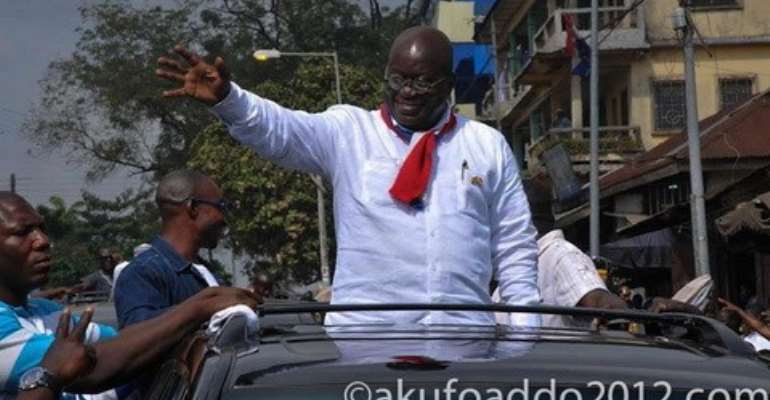 A New Patriotic Party (NPP) national chairman aspirant, Paul Afoko, has written a carefully worded letter to the national elections committee, demanding that both Nana Akufo-Addo and Dr. Mahamudu Bawumia be excluded from voting at Saturday's national delegates congress of the party.

Although Mr. Afoko's April 7, 2014 letter did not categorically mention the names of the two top party guns, he quoted article 9 of the party's constitution to argue that the two-time flag bearer of the NPP Nana Akufo-Addo and his running mate, Dr Bawumia have no business coming close to ballot papers for the purpose of voting this Saturday.

He wrote, “Section 2(i) of this article gives us the membership of the National Executive Committee.

Mr. Afoko also claimed to have observed that all the above mentioned category of persons who are entitled to attend NEC meetings under article 9 section 2 (ii) have all been included in the delegates register even though it is clear from the constitution that they are not members of NEC.

He said he has therefore instructed all his polling agents to stop anyone from the above category who attempts to vote during Saturday's elections.

He added that “as a party that took the national electoral commission to the Supreme Court over irregularities and malpractices in the 2012 general elections in the country we cannot afford to mess up our own internal elections”.

The letter also raised issues he alleges could mar Saturday's Tamale Conference of the party, including issues with arrangements for proxy voting during the weekend's polls, demanding that proxy votes be put in ballot boxes different from those of regular voters.

Mr. Afoko therefore called for an urgent meeting off all aspirants, representatives of the national electoral commission and the NPP's election committee this Friday to have a final brush on the process and more importantly to know the modalities for the collation of results after the elections.