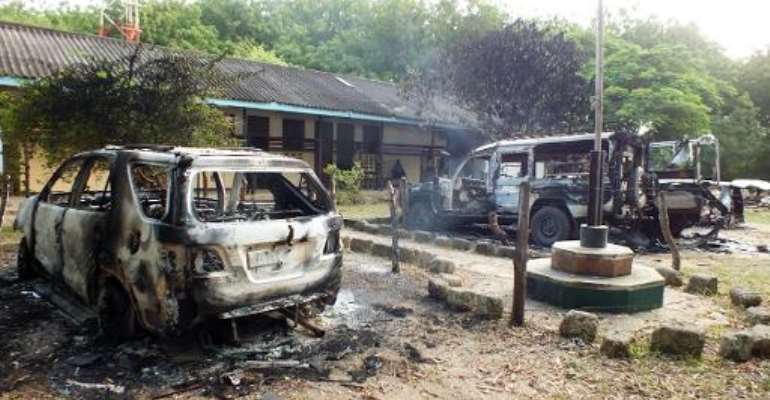 Charred vehicles sit outside a police station in Mpeketoni, in Lamu county along the Kenyan coast, after some 50 heavily-armed gunmen attacked the town near the coastal island and popular tourist resort of lamu the night before. By (AFP)

Around 50 heavily-armed gunmen drove into the town of Mpeketoni, near the coastal island and popular tourist resort of Lamu, late on Sunday, officials said.

Witnesses said they first attacked a police station, before starting to randomly shoot at civilians, some of whom had been watching the World Cup in local bars and hotels.

District deputy commissioner Benson Maisori said several buildings in the town -- which is around 100 kilometres (60 miles) from the border with Somalia -- were burned down including hotels, restaurants, banks and government offices.

"There were around 50 attackers, heavily armed in three vehicles, and they were flying the Shebab flag. They were shouting in Somali and shouting 'Allahu Akbar' ('God is Greatest')," he said, adding they attacked a police station but officers fought them off.

Bodies were scattered on roads across the town where people had been killed as they fled.

Resident Anne Gathigi, 38, a mother of five, said the attackers killed her husband.

"They forced their way into our house, found us in the bedroom. They picked up my husband and took him to the sitting room where they demanded money from him, as soon as he gave them some cash, they shot him at close range," she told AFP.

"Then they turned to me and asked me if I knew Al-Shebab. They told me since 'our government has refused to pull our soldiers from Somalia', they had come to leave us 'widows and orphans'."

Local resident and witness John Waweru, 28, said he lost two of his brothers to the attackers.

"I heard them shouting in Somali as they fired around... I ran and locked up myself in a house," he told AFP.

The fierce gun battles continued until after midnight, but by dawn on Monday the town of Mpeketoni was reported calm with security forces saying they were in pursuit of the attackers.

Police spokeswoman Zipporah Mboroki confirmed that 49 people had died, including at least one police officer.

"Our officers are still combing the area," Kenyan police chief David Kimaiyo told AFP, adding "we suspect the involvement of Al-Shebab in this attack."

"Security has been beefed (up) across the country," Interior Minister Joseph Ole Lenku told reporters, calling the killings a "heinous act".

The Shebab vowed revenge, carrying out a string of attacks on Kenyan soil, including last September's assault on Nairobi's Westgate mall in which at least 67 people were killed.

The town of Mpeketoni, a trading centre on the main coastal road, lies on the mainland some 30 kilometres (20 miles) southwest of Lamu island, a popular tourist destination whose ancient architecture is listed as a UNESCO World Heritage site.

Chirchir also said the attackers were "likely to be Al-Shebab," although there was no immediate claim of responsiblity from the Islamists themselves.

Residents in surrounding villages also reported that the gunmen attacked settlements as they pulled out after fighting in Mpeketoni.

"There are six bodies here, a man and a child in their house, four lying on the road," said Mohammed Hassan, a local resident of Kibaoni, a small settlement some five kilometres (three miles) outside the town.

Britain this week released warnings to citizens in several East African nations -- including Djibouti, Ethiopia, Kenya and Uganda, who all have troops in Somalia -- speaking of the threat of attacks at public screenings of the World Cup.