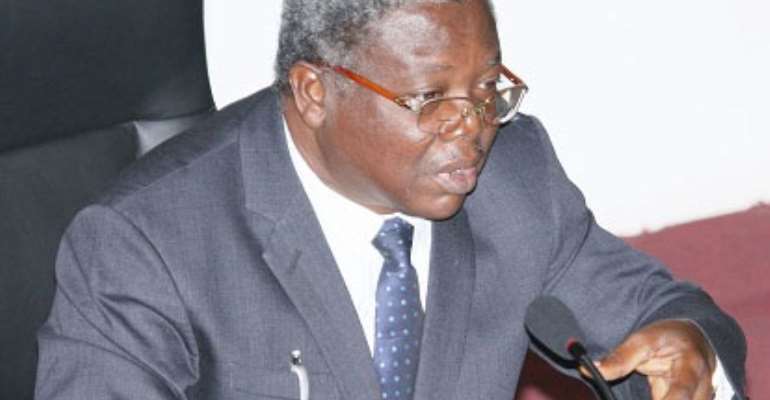 The controversy surrounding the compensation claim for the acquisition of a 32.68-acre land by the Bentiamina Clan of Jasikan in the Volta Region continues to inundate the Judgement Debt Commission sitting in Accra.

A  witness, Evangelist Nana Sankrankye Attah, who presented himself as onetime head of Bentiamina Clan which is the Adonten Division of Buem, appealed passionately to the Sole Commissioner to halt the payment of GH¢42,000 which has accrued interest up to GH¢998,000 as judgement debt.

According to Nana Sankrankye Attah, he never authorized one Emmanuel Ofori of Vakpo, led in court by Lawyer Seth Mensah Dumogah of the Ministry of Food and Agriculture Legal Department to go to court to claim compensation for the land acquired by the government for the Jasikan District Assembly.

Yesterday, Lawyer Dumogah and Nana Sankrankye Attah were expected to appear before the Commission for further cross-examination but the lawyer wrote asking for permission to enable him to travel outside the jurisdiction.

Nana Sankrankye Attah however, was able to appear before the Commission and when asked to confirm if he authorized the said Emmanuel Ofori to go to court to claim compensation, he said, 'Not to the best of my knowledge…I have never done that.'

He also said he never authorized Lawyer Dumogah to litigate on his behalf saying, 'I have never known him until March 31, 2014.'

It emerged at the Commission that it was a Ho High Court that had ordered the government to pay a judgement debt of GH¢760,000 after an initial claim of GH¢42,000 and the amount accruing to GH¢998,000.

When the Attorney General who was not involved in the calculation of the interest tried to set aside the judgement the court refused the application.

Before Nana Sankrankye Attah testified, Killian Kwame Abrampah, DCE for Jasikan, accompanied by his counsel Akwasi Bosompem also appeared to throw more light on the acquisition of the land in contention.

He said the assembly was currently occupying only 17.89 acres of the land acquired for offices of the assembly but when the family went to court they had claimed compensation for 32.68 acres.

The DCE said upon securing the default judgement, the family had wanted to attach the property of the assembly in the process but they managed to set the judgement aside before filing a motion on notice to contest the case which he said 'is pending in court.'

Later, the Attorney General/Solicitor General who was expected to testify in a case involving the AG and one Esther Boadu could not be heard because the AG's Department said it was still searching for the case file.

The Director of Administration in charge of Legal Matters at the Ministry of Health, Hamidu Adakurugu, also testified in Esther Boadu's case and said the ministry did not know about the case until they were subpoenaed.

'I became aware when the subpoena was issued. The complaint never got to the ministry. There is no trace of this in our record.'

He said the ministry had contacted the hospital concerned and they were yet to get a response.

It emerged the said Esther Boadu had sued the AG nominally and when the case was ongoing, the AG opted for an out-of-court settlement before returning to the court to announce a settlement of GH¢30,000.

The 'Commission of Enquiry into the payment of Judgement Debt and Akin' under C.I. 79 to investigate the frivolous and dubious payments of huge monies to undeserving individuals and companies, was appointed by President John Dramani Mahama after public uproar over the payments in what has now come to be termed as Judgement Debts (JD).

Notable among them were payments made to CP (â‚¬94 million) and the never-ending case of GH¢51.2million parted to the self-styled National Democratic Congress (NDC) financier, Alfred Agbesi Woyome, both of which many believed were dubious and frivolous.

Justice Yaw Apau of the Court of Appeal is the Sole Commissioner.