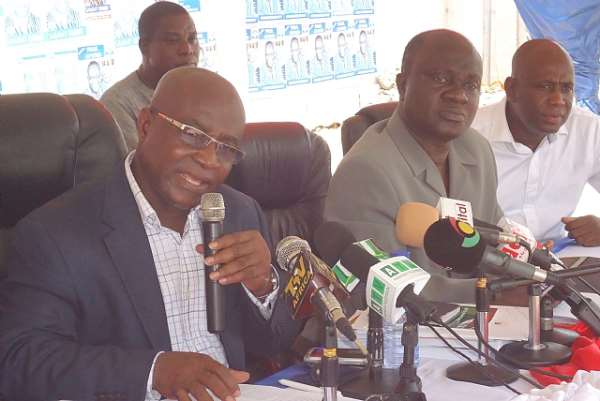 Public debt stock, according to the Minority Leader, Osei-Kyei-Mensah-Bonsu, 'is now GH¢55.6 billion', estimating that 'as we speak today, every Ghanaian, including babies who are born owe GH¢2,000 (¢20 million).'

'Compatriots, the evidence of the true state of the economy, can be found in our everyday lives, in the markets, in our residences, in the workplaces, in the industries and in the streets where the cost of doing business has skyrocketed, impacting negatively on employment in both the formal and the informal sectors,” Mr. Osei-Kyei Mensah-Bonsu, who addressed a press conference at the NPP head office, said.

He said comparing the sustained and consistent growth rates under President Kufuor with rates since 2009 under former President Atta Mills and President Mahama, the economy slackened considerably from 8.4% to 4.0% in 2008 and rose to 5.0% in 2010 and rose further to 14.4 percent because of the oil find but has started declining again and is now at 7.4 percent as of 2013.

'If the chequered, non-steady, shrinking economic growth rates are what President Mahama referred to as sound economic fundamentals, then we wonder where he learnt this bogus economic analysis from since he characterised his address as a lecture in economics,' the Minority Leader wondered.

He said the cedi had plummeted and is now selling at GH¢2.8 to a dollar and it is predicted to sell at GH¢3 to a dollar by the end of the second quarter.

Debt Stock
He indicated that under the Mahama administration, the country's debt had ballooned from GH¢9.5 billion at the beginning of 2009 to GH¢55.6 billion – which is about 485% increase in the debt stock over the five years that the present National Democratic Congress (NDC) administration has been in power.

He said there is clear confusion in government over borrowing which so far the NDC government has nothing to show for, after incurring gargantuan debt for the people of the country.

He pointed out that while the President was damning critics over continuous contraction of loans, his Finance Minister was in Parliament on Tuesday, April 1, telling Ghanaians that the government had put a freeze or moratorium on new loans.

'Was it an 'April Fool's' joke for the Finance Minister to contradict the President on securing new loans?” he queried, adding that it could be indeed an 'April Fool' 'thing' because on that day the Minister was announcing a freeze on new loans, he was at the same time asking Parliament to approve of a $300 million loan for peace-keeping and military logistics.

The Minority Leader indicated that Ghana's debt stock is equivalent to about 58% of the country's rebased Gross Domestic Product (GDP) and that there are indications that by the end of 2014, it will reach 60%, if the course in economic management does not change.

'It is now clear that we have a team of confusionists leading our dear nation,' Osei-Kyei Mensah-Bonsu stressed.

The Minority said under President Mahama, the manufacturing sector had performed badly because of bad policies being implemented by the government.

Mr Osei-Kyei Mensah-Bonsu said indiscipline in government expenditure, which reached unprecedented levels resulting in huge deficit of 11 percent of GDP, as well as excessive arrears in 2013, is what is making the local currency very weak.

He said the government had stifled the growth of the industrial sector by borrowing hugely domestically, forcing interest rates to hit 32%, while many industries are being forced to buy generators as a result of poor supply of electricity and other utilities.

'Manufacturers in Ghana today have to pay tax rate of about 35% and so how can they remain competitive enough to support his 'made-in-Ghana' agenda which is aimed at creating employment?' he asked.

The Minority Leader said President Mahama was trumpeting in his State of the Nation Address that he was concerned about the high unemployment rate in the country, yet his government had put a freeze on employment in the public sector.

Energy Crisis
According to the Minority, the energy sector is indeed suffering under the Mahama administration because 25 percent of energy generated is lost since the Electricity Company of Ghana's transmission network is in a terrible state of disrepair, adding that the ECG loses over $110 million yearly due to poor transmission.

According to him, the thermal plants in Takoradi particularly the T3 Plant, had run into technical problems arising out of contractual disagreements between the Volta River Authority (VRA) and the Canadian contractor.

He said despite the promise by the NDC government to construct housing units for Ghanaians through the ill-fated STX deal, the housing deficit continued to rise as the government had failed to complete the affordable housing projects started by President Kufuor's NPP administration.

'Majority of Ghanaians, especially in the rural areas, cannot have access to potable water, even though the government pledged to drill 20,000 boreholes nationwide to serve the rural areas,' he bemoaned.

Corruption
The Minority indicated further that apart from the revelations made by it and the expose by the former Attorney-General, Martin Amidu on some corrupt practices in government, Ghanaians continue to express concern about the massive graft and corruption that had become the order of the day.

The Minority noted that the agricultural sector had also performed abysmally under the Mahama administration while prospects in sports are nothing to write home about.

'Those of us in the NPP Minority caucus are determined to delve into those matters, especially the circumstances surrounding the sale and purchase of the Merchant Bank, the unrealistic cost of the Ridge Hospital upgrading and hanging matters relating to the purchase of the Embrear planes for the military in respect of which late President Mills caused the setting up of an investigative committee,' the Minority Leader said.