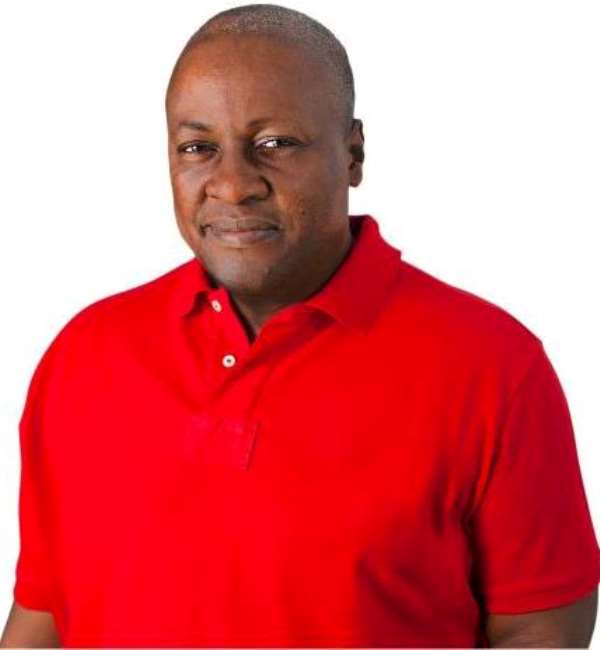 The depressing reality in the governing National Democratic Congress is so glaring and apparent for any true adherent of the tenets of Probity, Accountability and Social Justice to see. The contours of rapprochement are beginning to decay and it is clear, at least from all indications, that President John Dramani Mahama himself is the chief pharmacist giving the ruling party lethal doses of poison to eventually kill it and deny it the opportunity to be in government after the 2016 elections.

To every discerning mind, the adroit position of the National Executive Committee of the NDC on the almost dead issue relating to the dismissal of the District Chief Executive for Ahafo Ano South, Mr Gabriel Barima, didn't come as a surprise. It was signs of an implosion long foretold. All the telltale signs and ingredients of an imminent implosion were inherent in that statement by NEC calling for the reinstatement of Mr Barima otherwise known as “Tweaa DCE”

The stakes are now high and President Mahama has bruised the egos of many supporters of the NDC including members of the National Executive of which he is a member. President Mahama's style of leading the NDC in government has knifed many of us party supporters at the back and I was not surprised when the hitherto subdued complaints about his leadership style became very loud grumblings in recent times. Nothing is scarier to the political fortunes of an incumbent President when those who have now joined the list of public grumblers are leading members of his party. Indeed, a subtle revolution has kicked start and the President must gird his loins.

Without any disrespect to the President, I shudder to say that the biggest problem of NDC today is President Mahama's kindergarten style of leadership. Supporters of the NDC have many reasons not to admire President Mahama's style of leadership and his penchant of commenting on almost every issue in his government. His non-inspirational speeches and plummeting popularity and charisma is headache to many of us who fought the NPP after the death of the late President Mills (May His Soul Rest in Peace) to make sure he was elected President in the 2012 election.

It should have been easy for the NDC and by extension Ghana if we have a thinking and proactive rather than a “try and see” leadership in President Mahama. His government appears not to be concerned about the development of the NDC and its supporters, the country and he has reduced the leadership of Ghana to Kindergarten governance.

The NDC and Ghana needs a progressive leadership. And progressive in this context means thinking less about one's self as a leader and thinking more about the generality of the people, not thinking of how to junket to next the EU summit or ECOWAS conference among others, and doing nothing but lament about problems facing the already depressed population.

Whiles in opposition prior to 2009, the NDC criticized and organized demonstrations to jab Mr Kufuor and his government of corruption, rampant increase in fuel and utility prices, excessive overseas travels and politics of cronyism among others. But I'm ashamed to say that President Mahama's government is practicing the worse forms of what we in the NDC accused the Kufuor government of doing from 2001 to 2008. The question then is what is the difference between the NDC and NPP?

Since President Mahama was sworn in on January 7, 2013, he has equalized or at best overshadowed Mr Kufuor with his overseas travel within the latter's first two years in office. I don't want to talk about vices and acts of reported cases of corruption in President Mahama's government, because they are very disgraceful and fades the social democratic inclination the NDC prides itself of.

I was particularly happy with the NEC's decision to wade into decision making of the President. But I must state that I don't support the reinstatement of the dismissed DCE. I support NEC's decision because I believe it was a subtle attempt to tell the President in plain understandable language that the NDC members have had enough of his bigamist political tactics.

If we attempt a post-humor reading the fertile imagination, the earth-shaking event of last weekend, with General Asiedu Nketsia's public appeal to the President in the matter of the Tweaa DCE, it would certainly have elicited an absolutely quotable line for posterity!

Like soap bubble, the charade exploded in the face of the President, much to the utter embarrassment of the denizens of his latter day enclave at the Flag Staff House.

Not even the yelling and ubiquitous groveling display of servitude by some of his few coward loyalists could prettify the gaping crater, deep enough to consume the entire schemes of attempt by the President to build his “new NDC” idea.

Sickening however, those who made a career of mischief intrigue and were past master of cloak and dagger and treacherously led the crusade in hounding the late Professor Mills (May his soul rest in peace) are now President Mahama's most trusted friends. What an irony of a most ungrateful servant! Professor Mills must be turning in his grave by now.

The riposte of a parallel presentation of a possible New Patriotic Party government in 2012 was so well choreographed by persons who are now surrounded by the President and regrettably those who stood their grounds and fought these opportunistic political homosexuals have been marginalized. Clear cases of mokey de work baboo dey chop!

In the midst of this backstabbing development, positive revolution by well meaning NDC members to straighten the President must be activated as soon as possible. So far as the Mahama government is concerned, members of the NDC have a forlorn hope ahead of the 2016 elections.

To be sure, the next implosion in the NDC to weed out the alien bad nuts would not the first time party will be having serious crisis. Whenever the silly season of politics draws near, the party's fault lines become more ominous and the schism widens. It happened in the Goosie Tanoh's Reform party era, the Dr Obed Asamoah's Democratic Freedom Party era and the last one the FONKAR GAMES. But in all of these tortuous political happenings in the NDC, it was some few disgruntled individuals against the party and in all of these incidents; the party has triumph over those individuals. In the present crisis in the party, it is between the not –too-well shielded President Mahama and his latter day saints against the NDC party. The loser in this guerilla warfare is apparent for all of us to see. You guess is as good as mine.