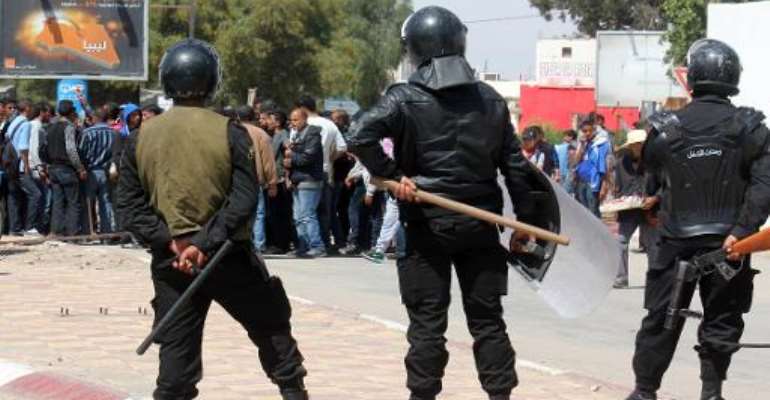 Tunisian riot police face residents of the southeastern town of Ben Guerdane during a general strike on April 2, 2014. By Jawad Nasri (AFP/File)

Tunis (AFP) - Tunisia's public prosecutor appealed a seven-year jail term on Monday for two policemen jailed for rape, and demanded a retrial with a view to seeking the death penalty.

"The prosecution relates to the characterisation of the facts as sex under duress with the threat of violence, under Paragraph 227 of the Penal Code, Article 1" which provides for the death penalty, his spokesman Sofiene Sliti told AFP.

There have been no executions in the North African country, birthplace of the Arab Spring, since the early 1990s.

The two policemen were convicted on March 31 of raping a young woman and sentenced to seven years in prison in a case that captured international attention.

The policemen had denied the charge, instead accusing the woman of seeking to have sex with them.

A third officer was given two years for trying to extort money from the woman's boyfriend.

Sliti said the court had not taken into account the use of violence, and that the defendants had also benefited from extenuating circumstances under Article 53 of the Penal Code, despite these not being explained.

Lawyers for the victim and and several human rights and women's organisations denounced the original sentences as too lenient.

The defendants said they had found the woman and her boyfriend having sex in their car in a Tunis suburb.

According to the charges, they took the woman to a police car, where two of them took turns to rape her, while the third tried to extort money from her fiance at a bank cashpoint.

The public prosecutor originally tried unsuccessfully to bring indecency charges against the couple, sparking a storm of protest and a campaign of support for the woman who was 27 when the incident took place.

The victim published a book in France entitled "Guilty of Being Raped" about her ordeal, writing under the pseudonym Meriem Ben Mohamed.