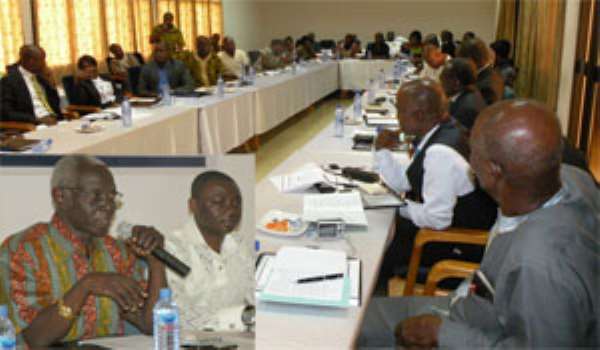 Participants at the forum,INSET: Dr. Afari Djan addressing the forum (seated left is Mr. Joseph Asamoah, an internal auditor with the E.C)

Ghana's referendum to amend its constitution later this year might not be successful if the district level and unit committee elections to be held in December record the usual low turnout it has been experiencing over the years.

This was disclosed by the Chairman of the Electoral Commission, Dr. Kwadwo Afari-Gyan at Ho, in the Volta Region over the weekend when the commission interacted with participants at a day's Consultative Forum on Public Elections Regulations (CI 75). The forum which is being held across the country was facilitated by KAB Governance Consult.

According to him, the proposed referendum to amend the 1992 Constitution may be included in this year's local government elections. As a result, a low voter turnout which may not affect the local government elections would make it impossible for the referendum to be held. He cited that voter turnout in district level elections has always fallen far below the Presidential and Parliamentary elections with big towns and cities being worse off than rural areas.

He therefore cautioned that per the law, 'for a referendum to be valid, the turnout should not be less than 40 percent of all the voters on the register… If we see 35 percent turnout, of course the district level elections will go ahead but for the referendum, it is a non-starter.'

Dr. Afari-Gyan further explained that 40 percent is the baseline for the referendum and the amendments to be effected and 75 percent of the turnout must vote in favour. He therefore called on all and sundry to participate in sensitizing and educating electorate to actively partake in this year's local government elections, which may also include the proposed referendum to amend the 1992 Constitution.

'We have a lot of education to do, to get high turnout during the district level elections and more significantly for the referendum,' he said.

Difficult Election
The EC chairman at the forum attended by participants, drawn from the political parties, media, clergy and other Civil Society Organizations (CSOs) also conceded that the district and unit committee elections is the most difficult among public elections organised by the commission.

This, he attributed to the large number of candidates involved in the elections and its associated difficulty in printing of ballot papers for the elections.

Dr. Afari-Gyan stated that the commission needed to print different sets of ballot papers to match all 6,156 electoral areas in the country unlike the case of 275 constituencies for parliamentary elections and one constituency in the case of presidential election.

He added that earlier attempts to decentralise the printing of ballot papers also failed, as printing houses in the region lacked the capacity to meet the demand and the schedule.

He suggested that 'it might be desirable in future to organise the elections in pieces; what we call 'tot-tot' elections, in northern sector, middle sector and southern sector.'

Dr. Afari-Gyan, who cautioned against the politicization of critical issues affecting the state, called for active local government participation which he said was 'self governance' to ensure high calibre of persons are elected to transform the country.

Participants at the forum called on the EC to critically look at the 'no verification no vote' to ensure that no eligible voter was disenfranchised in subsequent elections.