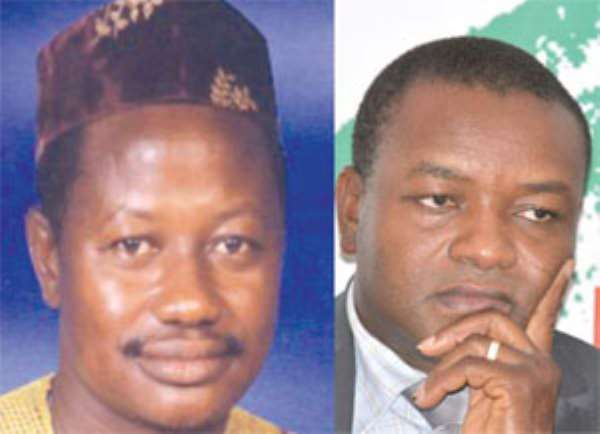 An Accra Fast Track High Court, presided over by Justice P.A. Ofori-Atta, would on May 2, 2014 decide whether or not to dismiss the defamation case filed by Hassan Ayariga, 2012 presidential candidate of the People's National Convention (PNC) against David Apasera, the party's National Treasurer.

This follows an application by Eric Osei Mensah, counsel for David Apasera for the case to be dismissed against his client who is a former Member of Parliament (MP) for Bolgatanga because it lacked certain basic fundamentals required for the commencement of a defamation case.

Mr Apasera accused Mr Ayariga of misappropriating GH¢1.6 million of the party's funds meant for the 2012 campaign activities and has gone to court for the retrieval of the money.

According to counsel for Mr Apasera, the writ violates Order 56 Rule of CI 47 which states that before a writ is issued for libel it should state sufficient particulars on the course of action.

He said words do constitute defamation and the words must be contained in the writ and not in the statement of claim and cited cases to support his case.

Mr Osei Mensah prayed the court to dismiss the application against the former MP because the 2012 presidential candidate of the PNC had failed to provide sufficient particulars of the publication in respect to the action brought to court.

However, Chris Akumey, Counsel for Ayariga disagreed with him and said they had meet all the rules and had provided copious and adequate particulars of the offending publications required for one to make defamation case.

According to him, if the rules of court require for something to be done it states so specifically and they had satisfied all the conditions required for the commencement of a defamation case.

Counsel for plaintiff told the court that he suspects the defendant wants to run away and should not be aided by the court to do so. The case was consequently adjourned to the said date.

The plaintiff, in his statement of claim, said on February 6, 2014 his family, friends, classmates and acquaintances all over the world informed him about a defamatory story in the DAILY GUIDE, Crusading Guide and other newspapers that he had embezzled the said funds meant for 2012 campaign activities.

He noted that the publications said he received the money on behalf of the party to be used to pay the PNC's agents, who supervised the elections.

In addition, he said the publications further claimed the two V8 Land cruisers, pickups and others vehicles had been kept at his house as his personal belonging.

In addition, he said the words used in the publications meant that he was a criminal who had short-changed the party through stealing, fraud, among others, and had willfully and maliciously kept cars belonging to the party.

The former flagbearer, who wants GH¢1 million as damages, said the publication had adversely affected his political career.

He claimed Apasera and his cohorts had mapped out various strategies to destroy his reputation.

Don’t give me reason to close down schools again – Akufo-Add...
8 minutes ago