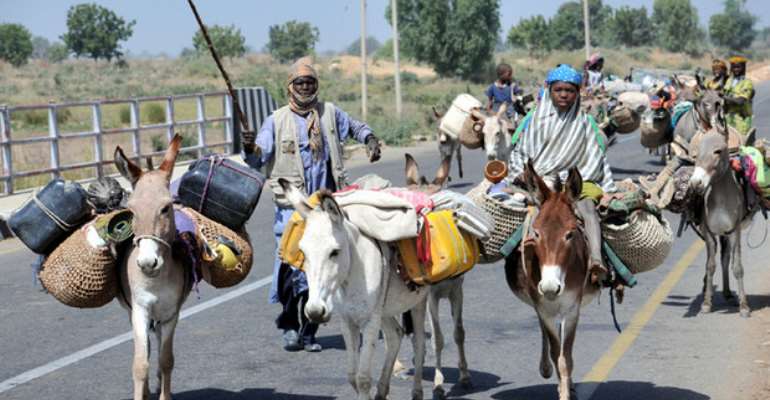 It's been happening for months, for years actually; at least as far back as 2012. About 100 so-called Fulani herdsmen dressed in army uniforms, riding motorcycles or driving in convoys and ravaging towns across Nigeria; killing all in sight and setting the towns ablaze; sometimes aided by helicopters.

In 2012, Police Public Relations Officer (PPRO) Ibiang Mbaseki described them thus: “a large group of Fulani militants putting on police and military uniform had invaded New Gboko in Takum Local Council of Taraba State… They succeeded in killing one police corporal. They were armed with more sophisticated riffles, including AK47 and they were all dressed in military and mobile policemen uniform.” [Guardian, 20th March, 2012]

In June again of 2012, another episode was relayed as a clash between locals. An eyewitness at the Benue border where the event occurred described: “farmers of Ai-Nedu community had gone to carry out their routine farming activities yesterday morning when they ran into an ambush of over 100 men who marched through Ogilolo community dressed in military camouflage and armed with sophisticated weapons.” [Thisday]

A similar massacre in October of the same year occurred which was assumed to be a revenge attack: “It was a pre-dawn raid,” he said. “The attackers…, some of them dressed in police uniform, came into the village. They killed eight worshippers in the mosque and killed 13 other residents in the village.” [Vanguard]

There were many more cases in 2013. Here's an account of two cases in Benue from the Guardian, in July: “Barely three days after gunmen suspected to be Fulani marauders, dressed in military uniform, invaded some villages in Guma Local Council of Benue State and killed 20 residents, another village in the area, Akuloko, was Sunday attacked during which no fewer than 12 persons were feared killed.

The Guardian investigation revealed that the marauders, dressed in military uniform, drove into the village in convoy in the early hours of the day and started setting houses ablaze as they shot sporadically at the people. Some of the victims were said to have died instantly while many others escaped with bullet wounds.”

Another among many, this one from Nasarawa in June of 2013: “Mustapha Danladi Ayaga, who was part of the team that conducted the delegation round the community… said the gunmen, dressed in riot police uniform and armed with sophisticated weapons, including AK47 and explosives, also abducted two members of the community. 35 houses and four cars belonging to the Agatu people of the area were also torched. “Over 500 militants dressed in riot police uniforms and heavily armed with sophisticated weapons ranging from AK47 guns, sub-machine guns and explosives, shot sporadically as they were strategically positioned round the village to ensure that all inhabitants of the locality were consumed.”

According to an eyewitness, the herdsmen also burnt down farmlands, house and huts in the affected communities.”

In February, Vanguard reported in Kaduna: 'An army of Fulani herdsmen reportedly invaded some communities sharing boundary with the western part of Plateau State and Kaura Local Government Area in Kaduna State. Speaking on the issue, Bulus Gwaza, a resident of Zankan, said the gunmen numbering about 100 invaded the three communities and started shooting indiscriminately in the night. “Right now, we have buried over 30 dead bodies and still looking for more.”'

March 14th, Thisday reports in Katsina: “Eyewitnesses told THISDAY that the gang of bandits numbering about 90, were said to be riding 30 motorcycles when they raided Kurar Mota and Marabar Kindo villages in Faskari and Sabuwa respectively. According to eyewitness accounts, the armed men shot sporadically into the air to scare away the residents.

However, the Chief Imam of Maigora village in Faskari confirmed that the bandits came in different attire, stating that some were dressed in army uniforms, while others wore Fulani clothing.”

Over 200 were killed in Zamfara this April as reported by SaharaReporters: “Gunmen were seen dressed in Nigerian Military uniforms, and riding about 50 motorcycles. The gunmen encircled the agrarian villages, and began shooting sporadically.”

And then there was the South Kaduna incident too.
In most of these cases, Fulani have been accused as the culprits, allegedly clad in military fatigue, sometimes with some dressed in so-called Fulani attire—which of course could also be uniforms.

The reality about this mess is; there has not been any concrete release by the state security services on what is really happening and who is actually involved. Have they ever arrested one of these uniformed assailants and properly identified him and interrogated him on his mission and affiliations?

What have the nation's security services done about this most deadly travesty that has plagued Nigeria for so many years?

In the most recent case in Unguwar Galadima, Zamfara where over 215 were killed, it was described that the attackers even had intel. of the vigilante meeting going on and came specifically for that purpose. The attack lasted for an entire three hours without any intervention from any security forces; till the entire town was burned down to the assailants' satisfaction. One wonders how these unknown gunmen can have proper and accurate intelligence of when to attack, yet our security services with the wealth of the nation and the official office to protect Nigeria never has intelligence on where and when these unknown gunmen are meeting or attacking to likewise ambush, apprehend or eliminate them.

Without further ado, the Office of National Security (ONSA) is hereby urgently subpoenaed to provide the Nigerian people a full briefing on the state of security of the nation and the true details of the threat Nigeria is under. We also require the ONSA to inform us on their progress, commitment and ability to contain this threat.

How are they able to operate with military uniforms in the full light of day?

Are these events across several northern states related?

Are these 'unknown soldier' assassin related to Boko Haram or part of the same Boko Haram larger mission?

Are they mercenaries?
How are they able to fly helicopters 'undetected' in Nigeria's fully monitored air space?

Are their helicopters the same or related to those Boko Haram also have been spotted using since 2012?

Have any of them been arrested? If so, what is their identity and mission?

Does Nigeria have a plan to arrest this terror?
Is the current administration capable of arresting this situation?

What do the people need to know as regards their safety and security?

Nigeria is currently the most terrorized nation in the world with the most deaths between January and April this year, of any nation not in active war. Nigerians need to know who is exterminating us and what our risk or hope is.