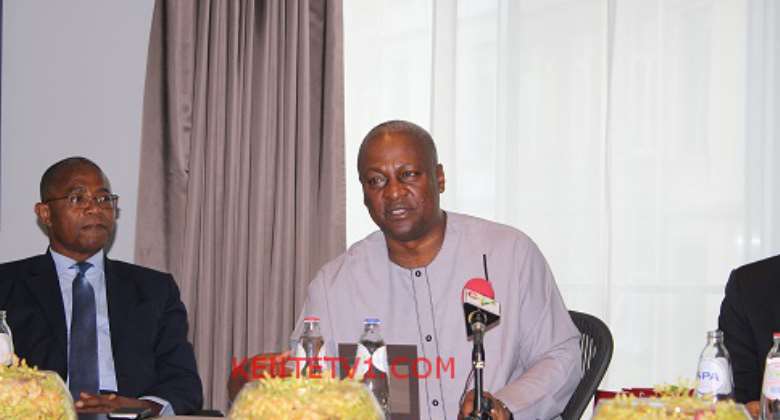 During an official visit to Brussels for the European Union - African Summit held on 2ND and 3rd April 2014, His Excellency President John Dramani Mahama of Ghana met with Ghanaian Community leaders at the Sofitel Hotel in Belgium, on 3rd April 2014, and discussed some of the challenges faced by Ghanaians in Belgium. He also took the opportunity to inform them about some of the current efforts by his Government to address the challenges confronting the country. The meeting created a platform for frank discussions and exchange of ideas on how Ghanaians in the Diaspora could contribute their quota to Ghana's development agenda.

Mr. Kwaku Boamah Acheampong, President of the Ghana Council in Belgium, appealed to the President for his intervention in four main areas of concern to the Ghanaian community namely , the absence of a Belgian Embassy in Ghana; the long processing period for Dual Citizenship Certificates ; the possibility of Ghanaians in the Diaspora voting during the next Presidential and Parliamentary elections in 2016;and the cumbersome customs procedures and expensive duties at the ports in Ghana when clearing goods .He explained that these factors discouraged investors and did not facilitate the conduct of business in Ghana. Mr Acheampong appealed to the President to use his good offices to urge Belgium to establish a fully fledged diplomatic mission in Ghana, to facilitate consular services to Ghanaians seeking re-unions with their families in Belgium, as this would help avoid visa applicants travelling all the way to Cote D'Ivoire where the Belgian Mission is based. He emphasized that the request was also against the background of the increase in business activities by Belgians in Ghana.

Prof. Emmanuel Boon, a Ghanaian lecturer at the Vrije Universiteit Brussels (VUB), on his part, emphasized the need for Ghana to pay more attention to science education for the youth, to enhance the country's human resource capacity and competitiveness. He also disclosed that under the auspices of the VUB, a project on E-learning will be implemented for 240 schools in Ghana. He hinted that a scholarship program funded by the Flemish Government which had in the recent past benefited Ghanaian PHD students was now in jeopardy as Ghana fell off the priority list. He accordingly appealed to the President to kindly put his weight behind efforts being made to restore Ghana to the list for the benefit of the country. He also advised that the authorities in Ghana should initiate efforts to sign bilateral agreements with the Belgian authorities for the benefit of Ghanaian students.

In his response, President Mahama indicated that Ghana was moving forward economically despite the challenges it had to contend with, principal among which were, the current shortfalls in energy supply and the decline in the country's foreign exchange earnings, which was as a result of the fall in commodity prices globally. He assured those present that his Government was committed to finding a lasting solution to the energy crisis, attributable to the current high demand for electricity from the existing infrastructure, which was inadequate. He noted that the crisis will be permanently solved when the gas project in Ghana became operational by the end of the year and provision of electricity was no longer subject to the irregular gas supply from the West African Gas pipeline.

To optimize the operations and enhance the competitiveness of Ghana's ports in the sub-region, President Mahama disclosed that the Government was financing the improvement of the Tema and Takoradi ports so that large ships could dock easily, which will ease the current pressure at the said ports. Efforts were also underway to ease the procedures at the ports to enable importers to expedite the processing of their documents and payment of duties to ensure the timely clearance of their goods.

In respect of taxes, the President decried the culture of tax evasion in the country and observed that a good social infrastructure and a sound economy, similar to what pertained in Europe, could only be achieved in Ghana when citizens paid their fair share of taxes. He therefore advised Ghanaians in the Diaspora to educate their families in Ghana on the need to pay their taxes to help finance the needed infrastructure. He lamented that at the moment, there were only about 2 million people out of the estimated 25 million Ghanaians who paid their taxes. To strengthen the economy, the President underscored the need to restructure the economy to favour the production and export of value added goods, instead of the traditional exports of raw materials ,which were not only subject to the vagaries of world market prices but also had relatively lower value.

The President added that his Government acknowledged the important role played by the Ghanaian Diaspora, for which reason a Diaspora Desk had been established at the Ministry of Foreign Affairs and was to be replicated at some Ghanaian Missions in countries with large Ghanaian Communities, to help tap their skills. He invited Ghanaians with skills and resources to come home to contribute their quota by taking advantage of the Local Content Bill, as well as invest to improve the economic and social situation in the country. He called on Ghanaians to bury their political differences and work towards the common goal of re-building the country.

Regarding complaints of delays associated with the processing of Dual Citizenship Certificates, President Mahama indicated that there were initially some contentions on the law which had been resolved. Nevertheless, he still assured the meeting that he will task the appropriate Ministry to review the situation to help expedite all outstanding cases to enable Ghanaians to take full advantage of the benefits of the law. While empathizing with, and noting the concerns expressed about the establishment of a Belgium Mission in Ghana, the President acknowledged that the decision remained the prerogative of the Belgian authorities.

The President mentioned that the inability of Government to implement a policy which will allow the Ghanaian Diaspora to participate in Parliamentary and Presidential elections in Ghana was due to inadequate financial resources. He further, explained that the conduct of such elections was the remit of the Electoral Commission, which was encountering funding problems.

In his conclusion, the President assured the meeting that his Government was doing all that was required to improve the economy and to resolve the challenges confronting the country but it will require the collective efforts of all Ghanaians to achieve these goals.