By Serge Daniel with Zoom Dosso in Monrovia 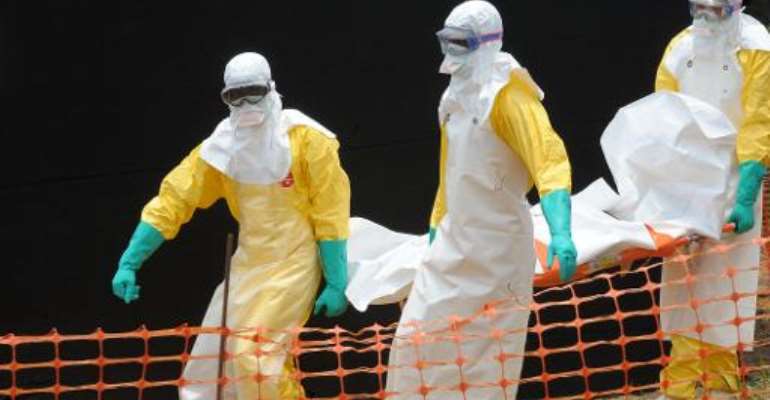 Staff of the 'Doctors Without Borders' ('Medecin Sans Frontieres') medical aid organisation carry the body of a person killed by viral haemorrhagic fever, at a center for victims of the Ebola virus in Guekedou, on April 1, 2014. By Seyllou (AFP/File)

Bamako (AFP) - West African countries mobilised Friday against an epidemic of haemorrhagic fevers including Ebola, which has claimed more than 80 lives in Guinea with more suspected cases in Mali, Liberia and Sierra Leone.

Guinea is the worst affected country with 86 deaths, 45 of them confirmed as Ebola -- a highly contagious disease that leads to external and internal bleeding and kills up to 90 percent of patients in its most virulent strain.

Mali on Thursday became the latest of Guinea's neighbours to announce suspected cases of Ebola, saying three victims had been placed in isolation while test samples were sent to the US Centers for Disease Control.

Oumar Sangare of the national health directorate said that all three patients were Malian citizens who "worked in a border zone between Mali and Guinea".

With Liberia and Sierra Leone also reporting suspected cases, Doctors Without Borders has described the outbreak as an "unprecedented epidemic" and warned the unusual geographical spread of cases complicates the task of containing it "enormously".

But the nation worst hit by the latest outbreak is Guinea, where haemorrhagic fever has killed 86 people out of 137 cases registered since January, according to the latest government toll.

The World Health Organisation said Friday that it is monitoring "just under 400" cases in the country, and is in contact with all those who may have come in contact with the disease from the forested southeast area of the country.

Other haemorrhagic fevers, including Marburg, have similar symptoms to Ebola, including muscle pain, vomiting and diarrhoea, as well as heavy bleeding and organ failure in severe cases, causing death.

There is no cure and little treatment for Ebola, although the government said Thursday two infected patients had recovered.

Experts say isolating victims is the only way to contain the disease, although that is not always straightforward in traditional communities, where social obligations and rituals are important.

Doctors without Borders, which goes by its French acronym MSF, said Friday it had been forced to suspend treatment in Macenta in southeastern Guinea after residents attacked one of its centres.

"Activities have currently been suspended at the treatment centre. Some members of the local community became agitated and then aggressive," said MSF spokesman Sam Taylor.

"We fully understand that the outbreak of Ebola is alarming for the local population, but it is essential in the fight against the disease that patients remain in the treatment centre."

Liberia has reported 14 cases of haemorrhagic fever, seven of them fatal, and all but one of the victims had contact with Guineans.

But Liberia's health ministry said one suspected victim from a forest near the eastern town of Tapeta had no Guinean connection.

"We have a case in Tapeta where a hunter who has not had any contact with anyone coming from Guinea got sick," chief medical officer Bernice Dahn told AFP.

"He was rushed to the hospital and died 30 minutes later. He never had any interaction with someone suspected to be a carrier of the virus and he has never gone to Guinea."

Samples from the hunter have been sent to Guinea for analysis.

Sylvain Baize, who heads France's National Reference Centre for haemorrhagic fever, pointed to the fruit bat, a regional delicacy that is suspected to be a natural "reservoir" for the Ebola virus.

The disease can spread to primates and humans who handle infected meat -- a risk given the informal trade in "bushmeat" in forested central and west Africa.

The west African region is confronted with its first ever major outbreak of such disease, unlike such central African nations as the Democratic Republic of Congo and Gabon, where some 1,200 people have been killed by Ebola since the virus was first discovered in 1976 in the former Zaire.

Guinea's neighbours have sent health teams to border territory and introduced measures to prepare for new cases and to prevent the spread of haemorrhagic fever.

However, the measures failed to quell fears among some residents of Mali's capital.

"I'm really afraid," said Mamadou Sylla, the muezzin of a mosque, who visited a health centre before the announcement of suspect cases. "A sick man came in and everybody thought he had Ebola. Everyone fled."