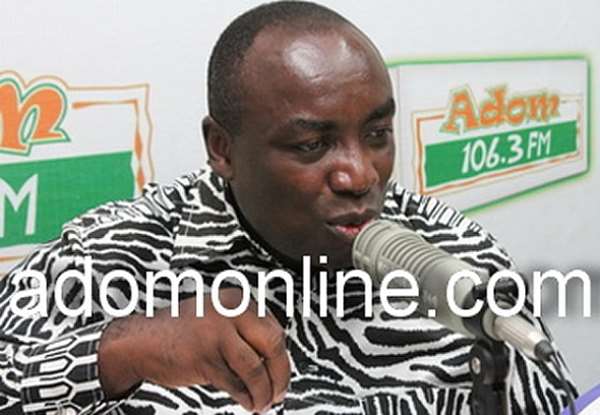 Aspiring General Secretary of the opposition New Patriotic Party (NPP), Kwabena Agyepong has bemoaned what he described as vile propaganda against him.

He said claims that he and former President John Agyekum Kufour have an Agenda 2020 to ensure the 2012 presidential candidate of the party, Nana Akufo-Addo, loses the 2016 general elections are concocted allegations “calculated to depict a fractured relationship between a potential presidential aspirant and myself”.

In a statement issued in Accra Friday, Kwabena Agyepong said he is convinced his opponents are peddling such falsehood because he is the preferred candidate for the General Secretary position.

He therefore urged party delegates to disregard the "baseless concoctions" and make the right chioce.

THE VILE PROPAGANDA MUST STOP
It has been my policy as an aspirant to refrain from vile propaganda against my opponents. My campaign has been issue based, and issues only. This is important to me because I believe we require a genuinely united Party for victory 2016, it is important for me to campaign in a way that has the party's ultimate interest at heart. There is no need for me to engage in unsubstantiated and concocted allegations against my fellow aspirants.

I know however that, most contests, the favorite becomes a target of well-orchestrated propaganda aimed at not only distracting him but to cause mass dis-affection among delegates. It is in this regard that I call on all delegates through your able medium to ignore and condemn those persons propagating falsehood about me and any of my aides. These tactics have been carried out with a great degree of sophistry calculated to mislead unsuspecting users of these platforms.

There are a litany of issues of concern. Currently making the rounds on various electronic media platform (Whatsapp & Facebook) includes:

·       A Photoshop publication allegedly showing a conversation between an aide of mine and a supposed “ghost” person.

We want to use this opportunity to appeal to all those engaging in these unethical practices to put a stop to the misuse of ICT in this internal election of our great party, the NPP.

The Headlines of informer & Herald this week are cases in point. Weather this vile propaganda is external or internal, it is clearly calculated to depict a fractured relationship between a potential presidential aspirant and myself.

However, we shall remain focused. There is no need to dissipate valuable energy smearing ourselves. What is going on is very disturbing. My candid appeal to all delegates is for them to disregard these baseless concoctions.