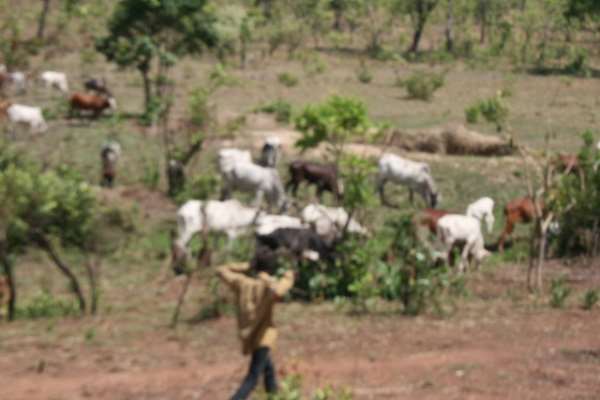 This is the situation and the order of the day where the Ghanaian farmer lives in perpetual fear. Apart from mass destruction of property, the Fulani herdsmen have also indulged in the wanton destruction of the environment leading to environmental degradation.

Almost all parts of the Northern Region are affected by the activities of the herdsmen with worst incidence in the Gushiegu District.

A woman in that district poured out her frustration when her son and her brother were murdered by Fulani herdsmen and their motor bike taken away from them when they were picking shea nuts.

The gruesome murder according (Azara) not real name has made people of the area to live in fear while some women are sometimes raped and give birth to unwanted babies.

Women can no longer travel beyond a Voice Shout, that is to say they fear to travel far away into the bush.

The reason is they fear to be raped. They fear to be killed and they fear to be molested. Though the survival of the people of the north particularly women depends on the picking of shea nuts, the presence of the Fulani herdsmen deter and compel them to stay at home.

Farmers could no more reap the needed food stuff that they expect due to the negative activities of Fulani herdsmen. In short farming is becoming a disincentive to the rural farmer in the Northern Region. Food is becoming a scarce commodity, which would exacerbate the poverty situation in the area.

Many sad stories are told from different districts in the Northern Region about the negative activities of these herdsmen.

For instance, another woman from the Kpandai District narrated how her farm was invaded by the cattle of some herdsmen in the community.

Similarly in Zabzugu a farmer complained that his harvested yam in the farm was completely destroyed by the cattle of the Fulani herdsmen.

When it comes to health, the drinking water sources (Dams) in most communities in the region have been polluted by the cattle of the Fulani herdsmen, a farmer said.

The cattle drink the water whilst the Herdsmen walk in the water, posing the danger of guinea worm and other water borne diseases.

The presence of the herdsmen is a serious threat to the environment in the country.

The herds of cattle cause a lot of soil erosion and the compacting of the soil.

Bush burning and felling of economic trees have become very rampant in the Region due to their activities.

The ECOWAS protocol that allows for free movement of persons, goods and services, across borders of member countries for does not warrant miss-conduct and violation of the host countrys laws with impunity.

The outcry of Ghanaians in the Brong Ahafo, volta, Eastern, Upper East, Upper West and Ashanti regions about the activities of the Fulani herdsmen should be a wakeup call for officialdom to do something about the situation.

It is suggested that law enforcement agencies team up with the chiefs and land owners to monitor the entry of the Fulani herdsmen and to strictly enforce the ECOWAS protocol which allows 90 days stay after which the person must apply for extension of stay in the country else be shown the exit.

District Assemblies in collaboration with traditional authorities should monitor the entry and exit of the Fulani herdsmen in their respective districts.

Government should beef-up logistical support for the law enforcement agencies to strictly and adequately protect the country.