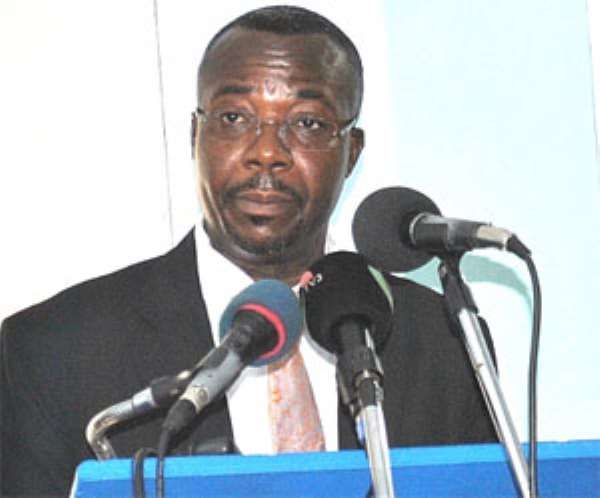 Dr. Mark Ankrah
The Managing Director of State Housing Company (SHC) Dr. Mark Ankrah, is in hot waters following his supervision of the sale of the corporation's guest house to a member of the Board of Directors.

The move has incensed the Minister of Water Resources, Works and Housing, Alhaji Collins Dauda, and has ordered the MD to reverse the decision within one week.

The state facility, located at 4 th Ridge Cape Coast in the Central Region, is believed to have been sold to the member of the Board, Senyo Thomas, at GH¢40,000.00.

It's unclear if the said member would continue to sit on the SHC Board due to the conflict of interest situation.

The one-week ultimatum given by the Minister ends today.

He directed Dr. Ankrah to 'show evidence within one week that the transaction has been aborted.'

Later a statement from the ministry signed by the Chief Director, Alhaji Ziblim Yakubu, pointed out that the transaction was unacceptable.

'The Minister is unable to agree with the MD that the sale of the guest house in question to the Member of the Board is justified, even though Mr. Dauda acknowledges that the SHC is a limited liability company governed by the Companies Code,' the statement held.

The statement said government is a 100 per cent shareholder and must therefore protect the public interest in the company's dealings.

It was a letter addressed to Mr. Senya on January 17, 2014 signed by Isaac Nai, General Manager, Finance and Administration, and copied to the Board Chairman, Managing Director, Chief Internal Auditor, Estates Dapartment and Operations Manager (Western Zone) that triggered the agitation, particularly from the union.

The letter to Mr. Senya entitled, 'Offer of Guest House, Cape Coast', stated, 'Reference your request to acquire the Old State Housing Guest House at Cape Coast and the relevant board approval obtained.'

It said, 'Management wish to offer you the above property located at 4 th Ridge, Cape Coast, for consideration of GH¢40,000.00. You are requested to pay 50 percent of the asking price within one month and the full payment within three months. You will be required to pay a processing fee of GH¢500.00 towards the participation of the lease document.'

Later, DAILY GUIDE obtained copy of a letter dated January 27, 2014 to the Managing Director signed by J.K. Arthur on behalf of the SHC unionized workers and copied to the Board Chairman, General Manager of SHC, General Secretary PUWU among others, expressing their displeasure at the deal.

In the said letter, it was indicated, 'The guest house is strategically positioned and it is very viable in respect of revenue generation for the zone.'

They said the guest house had in the past generated much funds for the zone and needed renovation and not outright sale to a member of the SHC Board of Directors.

'The sale is an attempt by management to deprive workers of the company their right to accommodation whilst on official duty at Cape Coast,' they observed.

Bad Faith
They further said that the sale violates Article 6.14 of the Collective Bargaining Agreement and that it would in future cost the company much in the hiring of hotels for staff who go to Cape Coast on official duties.

'I am further directed to inform management that all the unionized workers are ready to buy the guest house at a higher prize for commercial use,' the letter claimed.

They wanted to find out from management who had done the valuation and why the union was not even consulted before the sale.

They said the sale was in 'bad faith' and could be likened to the sale of state lands and property to government officials and ministers of state at the expense of the nation.