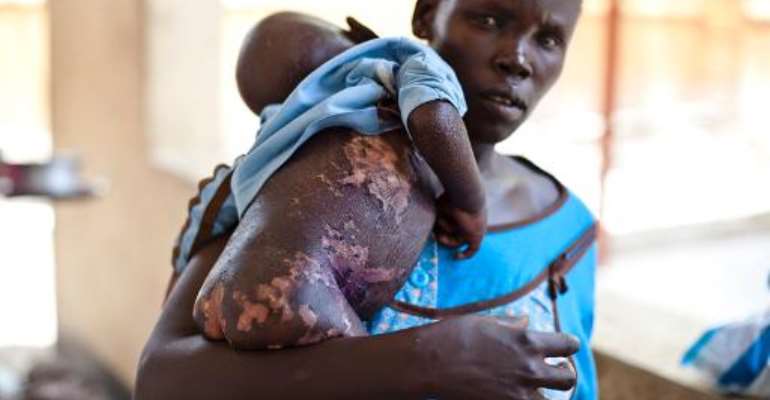 A woman holds her severely malnourished baby in the malnutrition ward of the El Sabbah Pediatric Hospital in Juba on March 14, 2014. By Ivan Lieman (AFP/File)

Geneva (AFP) - War-torn South Sudan could become the scene of the worst famine catastrophe in Africa in decades without more aid and a ceasefire to let farmers reach their fields, the UN warned Thursday.

"If we miss the planting season, there will be a catastrophic decline in food security," Toby Lanzer, the UN's top aid official in the country, told reporters in Geneva.

"What will strike that country, and it will hit about seven million people, will be more grave than anything that continent has seen since the mid-1980s," he warned, referring to the massive famine in Ethiopia that shocked the world's conscience.

South Sudanese farmers usually plant their fields in April and May, but they have been unable to start this year amid a raging civil war.

"We've got 3.7 million people who are already at severe risk of starvation," Lanzer said.

If people can't make it to their fields in the next two months, he said, "it doesn't take much to imagine what will happen when the harvest is due in November and December: There won't be one".

Making matters worse, the violence has meant UN agencies are having huge difficulty pre-positioning food stocks before the onset of the rainy season, when downpours will make already challenging roads even more difficult to navigate, he said.

A ceasefire signed in January is in tatters.

More than 800,000 people are displaced inside South Sudan, while almost 255,000 have ﬂed to the neighbouring countries of Ethiopia, Kenya, Uganda and Sudan, the UN says.

Lanzer insisted on the need to quickly ensure enough security for people to feel it is safe to head to their fields, and to bring in far more aid in the form of seeds and tools to help get things started.

He said that donations so far had fallen far short of needs, with a UN appeal for nearly $1.3 billion for aid to the country only a quarter funded.

The world body needed $232 million to ensure only the bare minimum of humanitarian aid in South Sudan through the end of May, he said.

Lanzer said the UN was working hard to prevent the existing catastrophe from metastasising, stressing that "if that were to happen, it's going to cost people a whole lot more."

"We are facing certainly one of the gravest humanitarian challenges that I have every seen," said Lanzer, who has also served in East Timour, Darfur and the Central African Republic.

"And it could get a lot worse."