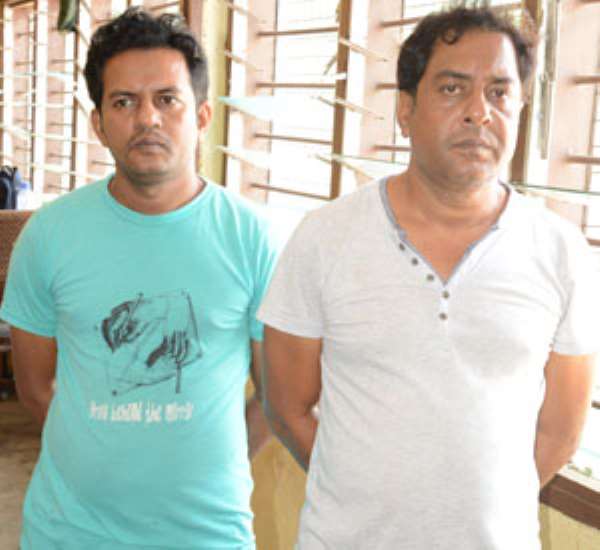 The two suspects after their arrest
The Anti- Human Smuggling and Trafficking in Persons Unit (AHSTIP) of the Ghana Immigration Service (GIS) has arrested eight Bangladesh nationals at Kasoa in the Central Region for allegedly smuggling migrants into the country.

Investigations conducted by the Unit revealed that two out of the eight arrested namely; Abu Naser and MohammedYousuf Khondakar with passport numbers AC0514757 and AE8013343 were the persons behind the smuggling.

The six other suspects who have over-stayed their Visitors Visas for several months are between the ages of 21 and 31years. They are; Akbar Ali, Harun Mohammed, Mola Nasan, Mohammed Hossan Deluar, Faruk MD Omar Gazi and Hossan Monir.

The six stated that they were lured into the country by the alleged smugglers to send them to South Africa and each of them paid an amount of $10,000.

The GIS wishes to inform the general public that it would not countenance the use of Ghana as a haven for human smuggling activities. Therefore, the general public, including foreign nationals are advised against the practice since it is contrary to the Immigration Amendment Act 2012, (Act 848).