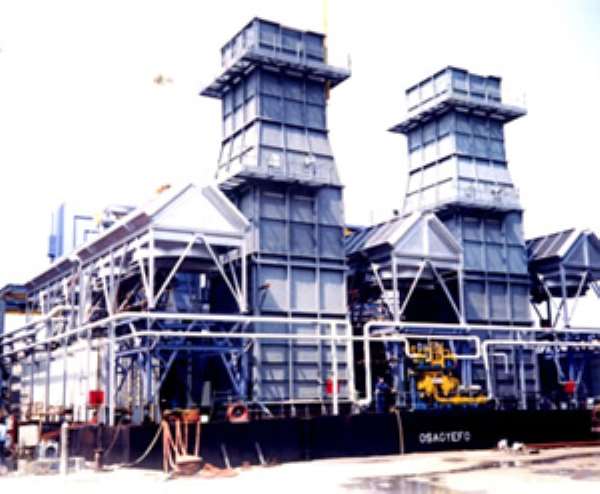 According to the paper, the International Court of Arbitration in The Hague, Netherlands, this week pronounced judgment on the disputed Osagyefo Barge which has for years been idling away at Effasu in the Western Region as a result of a long-running battle between Government and Balkan Energy over certain terms.

Balkan Energy was claiming almost $2 billion for the abrogation of the contract, the paper says, however, the court took cognizance of an earlier ruling by Ghana's Supreme Court on some cases to slash down the demands to $12 million.

'In fact the International Court looked at how our Supreme Court had ruled on local and international contract cases and came to that decision' the paper quoted its source in as saying.

Per the ruling however, the barge now becomes the property of Ghana, according to the newpaper.

Balkan Energy Company signed a 20-year contract agreement with the Government in 2007 to equip, refurbish and commission the barge as well as its associated facilities within a 90-day period at a cost of $40 million.

The contract was part of policy options pursued by the Ghana Government to stem the power shortages in the country at the time.

The barge was purchased by the Ghana Government in 1999 and was conveyed to the country in 2002.

It was built in Italy with a Japanese loan of $110 million, but the thermal plant sat at an Italian port for two years, attracting a fee of $10 million before being moved down to the Sekondi Naval Base where it remained for another two years because the landing bay at Effasu in the Jomoro District of the Western Region, was silted.

The prolonged litigation was due to the Balkan Energy's insistence on auditing the country's entire power lines /business/2013/December-31st/dark-clouds-over-osagyefo-barge-to-settle-next-month.php before firing the Osagyefo Power Barge meant to generate and add about 125-megawatts of power to the national grid.

It also wanted full details of the facility's component, while the government had also demanded to know whether or not the barge was ready to generate power.

Balkan Energy turned down the government's request on the grounds that Ghana was not ready to distribute the power that would be produced from the barge due to its unsuccessful demand for an audit of the power lines.

The government's contention was that the lines were already set to receive the power from the barge and so there was no need to audit the system before firing the plant. This standstill brought the issue to The Hague.

The Minister of Energy and Petroleum, Mr Armah Kofi-Buah, told the Graphic Business in December last year during a meeting with a section of the media that Ghana was convinced it had a case and was therefore certain about a positive outcome.

But before the dispute travelled to The Hague, Balkan Energy had also contested the legitimacy of the Power Purchase Agreement (PPA) that leased the Osagyefo Power Barge to it in 2007 to operate.

Under the PPA, the 125-megawatts Osagyefo Barge was leased to Balkan Energy Ghana, wholly owned by Balkan Energy Company LLC, to commission within 90 days of an effective date defined in the agreement, repair, rehabilitate the barge.

It would be recalled that in 2012, the Supreme Court of Ghana by a unanimous decision, ruled that the Power Purchase Agreement dated July 27, 2007 between the Government of Ghana and Balkan Energy Ghana Limited that gave the former a lease agreement on the Osagyefo Power Barge, was an international business transaction.

The court, presided over by Justice William Attuguba, gave the landmark ruling after it assumed its original jurisdiction of interpreting what the meaning of 'international business transaction,' in accordance with Article 181(5) of the 1992 Constitution that had become a bone of contention, a case in which the state had sued Balkan Energy Company LLC, Balkan Energy Ghana Limited, and Mr. Philip David Elders, an American investor, at the High Court (Commercial Division)

The ruling, read by Justice Date-Baah, also viewed the arbitration provisions contained in clause 22.2 of the PPA dated July 27, 2007 between the Government of Ghana and Balkan Energy (Ghana) Limited, as not constituting an international transaction.

The rest of the panel members who sat on the case, include Justices Julius Ansah, Mrs. Sophia Adinyira, Annin Yeboah, Sule Gbadegbe, and Mrs. Vida Akoto-Bamfo.

According to the Court, the transactions entered into had elements that made it an international transaction, noting that Balkan Energy Ghana Limited was a wholly-owned subsidiary of Balkan Energy Company LLC, incorporated in the United Kingdom, and established by Mr. Philip David Elders.

Additionally, the Court indicated that the amount involved in such transactions are significant and quoted in foreign currencies, with the principal partners resident abroad.

It further asked Parliament to enact a bill indicating what constitutes and International Business Transaction, in order to set parameters that would be followed in any such transaction.