President Jonathan Was Not Drunk Again In Brussels, Or Was He? What He Said… 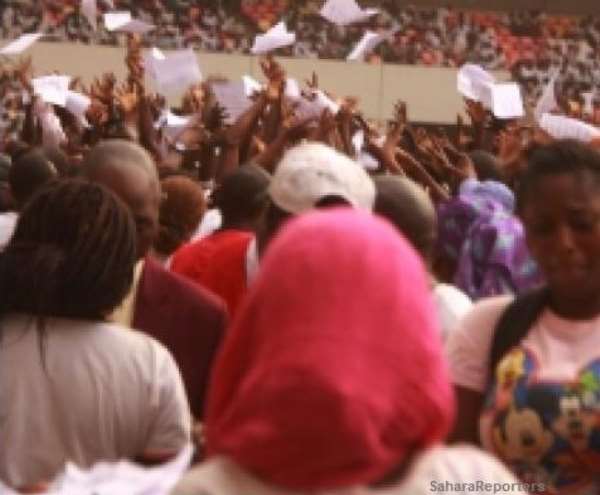 Whenever the President of Nigeria travels overseas to 'represent' the nation, its people hold on to their seats fearful of what the outcome will be. So far it has been one of two things; a. President Jonathan gets drunk and is AWOL at his turn; or b. The President gets drunk and inebriated and speaks unhinged, disgracing Nigerians and shocking the world with his utterances.

His recent performances in the US (where he told Obama that for him to fix the world, he must fix Africa, and for Obama to fix Africa, he must fix Nigeria [Man in tank alert!]), Namibia and now in Brussels were the 'b,' type. Apparently, stopping himself from getting too drunk to appear as was the order of the day earlier in 2013, when he was noted to have missed his appearance in Ethiopia at the AU's 50th anniversary and later that year when SaharaReporters broke the embarrassing news to Nigerians that he got drunk celebrating his birthday and missed the Investors Summit meeting in the United Kingdom; the president this year has been able to show-up (barely), but has made the most depressing, provoking and racist utterances at his external appearances.

“Where do they get these sophisticated weapons? The total value of what these terrorists possess as individuals, in terms of what they wear, where they live, cannot buy an assault rifle. We all have the collective responsibility to un-earth their sponsors and supporters who are determined to destabilise Africa. We should hold them responsible and accountable for their actions.”

What! We thought the President had rejected the World Bank assessment that 60% of Nigerians (100 million) lived under a dollar-a-day? It is hard to believe that our President will speak of the so-called poverty of the north of Nigeria in this way. Was this script written for him?... not likely possible. This was certainly 'Paraga' speaking. That citizens in the north cannot afford to purchase rifles? That the net worth of northern citizens and Boko Haram recruits from the neighboring northeast nations, is less than $75, the cost of an assault rifle on the black market! [See cost: http://www.havocscope.com/ak-47-price-in-the-niger-delta/]

Our dear President just told the world that if the average northern recruits to terror, emptied their life savings, sold their hut, clothes, and all other assets, they cannot come up with $75. Wow! If it is true, wow! If it is not true, wow! If it is true and this is the time and type of confession he decided to make at Brussels, wow! I'm not sure he would speak the same way of the poor in Otuoke.

He went further to task foreign nations on the source of funding for Boko Haram. Was the drink so strong that he did not remember that his government serially pays millions of dollars ransom money to free kidnapped cabal and politicians' families? Was the hang-over or blood level so high that he forgot that he, and his Nigerian government is yet to arrest a single sponsor of Boko Haram, not even the ones on the Abba Moro white paper report which has been on his and NSA Dasuki's desk since 2012? Perhaps in the state he was, he thought the northeast plagued by Boko Haram was part of another country, not in his jurisdiction, Chad perhaps and not a part of Nigeria. This is a most likely possibility considering the precedence of his coincident outpouring to the Namibian President late March this year, also under the same influence. He said:

“Initially, we handle it (Boko Haram terror) with kid's glove, but now we have decided to be a little more forceful because we must thrash out these terror groups. We must not allow it to continue to slow down economic growth in that part of the country. With the terror attacks in that part of the country (North), the rest of the country (South/My part) feel it because Nigerians live everywhere (Southerners who I consider 'Nigerians' live everywhere, i.e., in the North –that I consider Chad—damn me if I know why they go there). In these other parts (South/My part), there is always the fear that if you do not tackle it, it will infiltrate in these other parts (South/My part—so I have now upped the war against them just a tad bit, to protect my parts).”

Why must he always display his disconnect with the north when talking in foreign lands about the insecurity in Nigeria under his watch? Does he believe these foreigners he is talking to, have a phobia for the north of Nigeria as he does (which explains his dealing with terror with amnesty reward offers for the devilish killers, 'kid gloves,' impunity for the sponsors and permission for the convoy drive-in massacres)? These disparaging and crudely unpatriotic statements were surely not scripted. Rueben won't ever write this, even Wendell Simlin, alias Reno Omokri won't. Teleprompts Mr. President! Don't risk going off cue when under the influence. Remember what Charlie Chaplin said, “A man's true character comes out when he's drunk.”

Perhaps it would be better had he not gone. The real and proud African leaders, the President of Zimbabwe, the President of South Africa, they boycotted the meeting in Brussels. They said they will not attend such “till Africans are treated equally.” Nigeria's President could have done the same and killed two birds with one stone — made us proud as Africans and saved us from the disgrace of his habits.

Brussels is the one place no true African wants to go to. In Brussels we still have colleges named after Africa's Hitler, King Leopold II, who led the colonization of Africa and orchestrated one of the worst genocides in human history — the massacre of up to 25 million Africans in the Congo. Brussels still has statues of this murderer littering their landscape, one at Place du Trône, at the Royal Palace in Brussels, Belgium. This is one place where had Jonathan not gone, like his honorable African counterparts; we would have held him in high regard. Little wonder he did not feature at the Mandela burial despite travelling down with 10 jets. Little wonder, no serious African or global leader came for his centennial celebration.

We do not represent what we should and we represent the unbelievable racism, tribalism and violence this twentieth century that we absolutely shouldn't, thanks to our 'high' leader.

Now, while our president was away, Nigeria's lead activist was peacefully protesting the Immigration scam in which over 18 innocent job-seeking Nigerians were killed. Japeth Omojuwa, Uche Briggs and other altruistic protesters were taking 18 coffins to the Ministry of the Interior for the 'burial' of the 18 martyrs killed by our vampire government.

Jonathan's forces brutally beat-up our dear Japeth Omojuwa and arrested him and others!

Nigerians vote #NoConfidenceInJonathan. This cannot continue. Harm at home and harm away!

The Minister, Abba Moro who blamed the devil for his killing 18 innocent youth is still free and in office, being PAID!; while a great Nigerian youth who volunteered his time and with the blessing of man and God, took coffins to donate for you to use to bury the dead is beaten mercilessly and arrested.

Mr. President, you should be considering making some very serious Nigeria's destiny changing announcements shortly with regards to the current occupancy of your office. Nigerians need the fresh air you promised. And then, when you've checked out, you may need to check-in to Alcoholics anonymous.