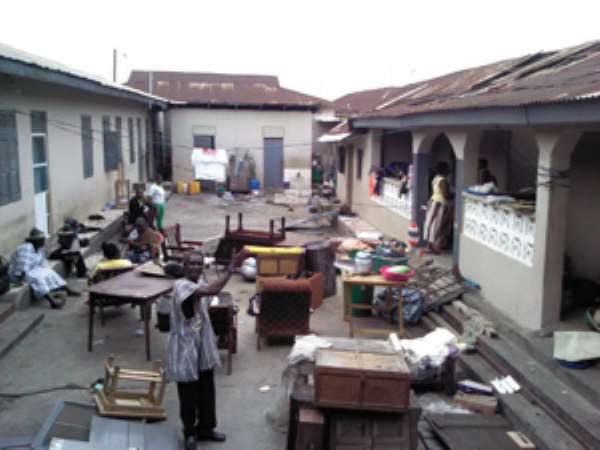 Some 'Macho' men believed to have been hired from Ashaiman in the Greater Accra region on Friday stormed the Anohene's Palace in Koforidua and destroyed property running into thousands of Ghana Cedis.

The bandits also stole regalia, gold ornaments belonging to the palace, as well as the black stool which is the symbol of the chief's authority.

The men broke into a room where the ornaments had been kept for the past 23 years after the death of chief of Ano, Berima Kwadwo Amponsah in 1991 and stole the items leaving behind the idol (Obosum).

After the act, they bolted through the rear window of the palace.

They allegedly stormed the palace under the instructions of one Essiamah Boadu, a supporter of the deceased chief, who claimed to be the Ano Abusuapanyin.

Under the guise of ejecting occupants of the palace through a 1996 court order which gave them access to only three rooms, Essiamah Boadu allegedly instigated the bandits to steal the items from the palace.

But the case was filed at the Appeals court last year for redress because loyalists of the late Berima Kwadwo Amponsah were dissatisfied with the ruling which gave their rivals access to the three rooms in the palace.

According to the Ano Abusuapanyin, even though the matter was yet to be determined, the faction allegedly vandalized the palace and stole the stool and all gold ornaments in the palace.

He said after the death of his grandfather, Berima Kwadwo Amponsah in 1991, the queenmother of Ano, Nana Kobuaa Anteng and the kingmakers, subsequently selected, confined and outdoored Nana Kwame Amoh after he was accepted by all the five royal gates.

He later swore the oath of allegiance to the Omanhene of New Juaben, Daasebre Prof Emeritus Oti Boateng.

However, the process was allegedly delayed by the Omanhene after Lawyer Awure Awuku challenged the choice of the family.

In the wake of the confusion, Lawyer Awuku surprisingly swore the oath of allegiance to Oti Boateng without recourse to the customs and traditions of the Ano family.

For this reason, lawyer Awuku was unable to step foot in the palace until his death in May last year.

Nana Abransamadu said after the death of the self-acclaimed chief, his supporters pleaded with him to allow the one-week celebration to be held in the palace but he blatantly refused because the deceased per their customs was not a chief and never performed any ritual.

'I told them however that we would think about it. But I think it didn't go down well with them”.

The Abusuapanyin said they (supporters of lawyer Awuku) later went to court and got judgment to take three rooms in the palace.

'They came last year to eject people from three rooms and those rooms have remained empty till date.

'However because of their intention to steal the chieftaincy regalia and ornaments they came to vandalize the house, ripping off our roofs and destroying property,' Nana Oteng Abransamadu said.

He also assured occupants of the palace that the matter was pending before the court and called for calm until the final determination of the case by the Appeals Court.