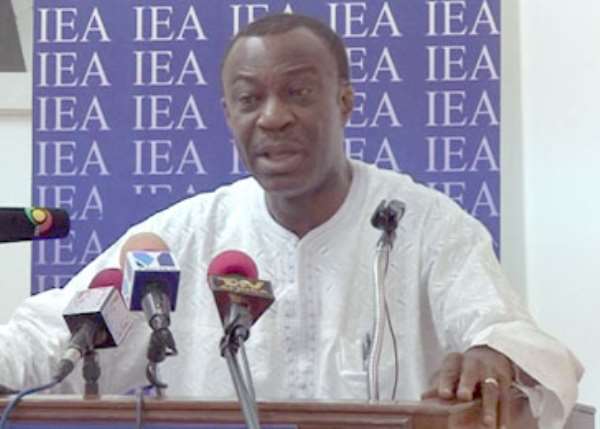 Some Minority Members of Parliament have described the urgent statement made by the Minister of Finance, Mr Seth Tekper, on the economy as an admission that the economy is in dire straits.

They said in spite of the use of the word “challenges” by the minister instead of “crises” in reference to the economy, it was clear that there was an admission that the going was tough.

The Minority Spokesperson on Finance, Dr Anthony Akoto-Osei, who was the first to comment, said finally there appeared to be a consensus that all was not well. Budget deficit and wage increases

Dr. Akoto-Osei commended Mr Tekper for being frank and candid and cautioned that unless something significant was done in the course of the year, Ghana would record double digit budget deficit by the end of the year.

He wondered how the government would ensure peace on the labour front with the announcement of a freeze on wage increases.

He said with the high inflation and difficult economic conditions in the country, it was inconceivable that there would be no increases in pay in the public sector.

Perhaps, he said, the best the government  could do under these difficult circumstances was to ensure that wage increases in the public sector did not go beyond 10 per cent, instead of a moratorium on wage increases.

On the moratorium on new contracts and new loans except those for pipeline items announced by the minister,  Dr. Akoto-Osei wondered how the government  could adopt that policy when currently before the House was a loan agreement awaiting parliamentary approval.

The Member for Sunyani West, Mr Ignatius Baffuor Awuah, said at a time when the economic situation of the Ghanaian was getting worse, it was quite strange that the government would put a freeze on wage increases.

The Member for Dormaa Central,  Mr Kwaku Agyeman-Manu, said the minister should have substituted the word “challenges” with” crises”, adding that what was happening in Ghana today with regard to the economy was crises.

The Minority Leader, Mr Osei Kyei-Mensah-Bonsu,  commended the minister for exhibiting a great degree of frankness with regard to the economic situation and said since it had become clear that the projected GDP growth rate was unattainable, the minister needed to state what the current rate was.

He sought to know the measures the Bank of Ghana had put in place by to stop the free fall of the cedi and what it had achieved thus far. Majority members

The Majority Leader, Dr Benjamin Kunbuor, described the statement as one which marked the red flags with regard to the economy and one which also lay bare the steps needed to address the problems.

He described the  country's economic situation as a serious matter which could not be entrusted to partisan politics.

The Member for Bawku Central, Mr Mahama Ayariga said the nation now had a consensus on the debt situation, the wage bill and the budget deficit.

He urged both sides of the House to “rededicate” themselves to working together to address the problem and lift Ghana out of its current economic predicament.