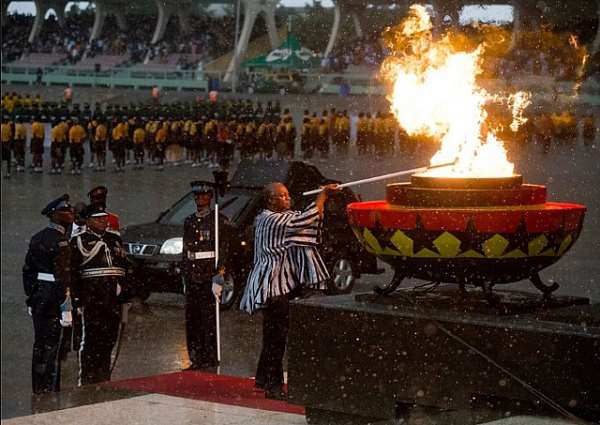 His Excellency president John Dramani Mahama offered himself and his government to the public and the media for his one year assessment of office. It is a congratulations and a plus to Mahama for him to emulate such a good precedent from his predecessors which was initiated by his excellency the former president John Agyekum Kufour .

Mahama's Governmet could only be seen as so-called better Ghana agenda in the eyes of himself, his cabinet, the National Democratic Congress (NDC) as a political party and its followers. Mahama and his administration are leaking their ears with feathers and found themselves dozing. His government always applauds itself by it performances. This is as a result of the 'dumso dumso' when he asked Ghanaians to be a little bit grateful to him and his government for being able to solve the problem.

Mahama's administration is only making life tougher for the ordinary Ghanain.Though each and everyone's level of development depends upon his or her hardworking. The fundamental basic necessities in life as food, clothing and shelter are difficult for the people to meet. Unemployment among the youth and the people is of no doubt but only increasing. Mahama's government is collapsing instead of creating, refusing the people from good governance,

Mahama's one year of office has been a year of hardship, injustice, lack of respect for rule of law, indiscipline, lack of transparency, corruption and impunity. Not mentioning the numerous agitations, allegations, scandals of corruption and unfulfilled promises.

Mahama and his government have only shown low level of commitment and competence in fighting corruption. Honourable Edward Doe Agyho's recent conduct in parliament house as speaker of parliament when he called for an emergency sitting of the parliamentarians to investigate the Fortiz –Merchant bank sale, was a high form of impunity and very shameful to the Honourable August House and the pedigree of Ghana's Democracy.

Most foreign policies Mahama and his cabinet sign's on behalf of Ghana have not being in the interest of Ghanaians, rather in favour of the Western communities. Talking of the fate of Ghana's oil industry and other income generating sectors. The three billion ($ 3.b) dollars China loan agreement is a vivid example to point out to.

The nation's Ministry of youth and sports, other sports and Youth institutions which supposed to offer massive employment to the nation and the youth considering the numerous talent human resources the nation have In sports, is only engulfed with mafia's and some corrupt officials. Unemployment. Educational System, Security, Agric Sector, Road infrastructure, Health Issues including the National Health Insurance Scheme, capitation grants issues,- continues depreciation of the cedi (lost of value of the cedi), corruption and many other issues as Water and Energy crises are of low concern to the Mahama's Government

The Energy crises 'dumso dumso' which Mahama claim's he has solved it and needs to be commended for, was a problem right under his administration. Therefore what is the need to applaud him and his administration for? Corruption under Mahama's administration has become part of the Nation's Social Cultural economic issue that need's to be tackled in addition to the other economic problems.

During the last quarter of the year 2013, Mahama optimistically used to say he is going to change the gear and hopes 2014 will be a better year for Ghanaians. His optimism proved him very wrong. How could 2014 become a better economic year while the previous year 2013 was worse performed. We build better upon good as we use to say,' good, better, best'.

Mahama and his administration have become short sighted and limited in thinking of how to hold the economy, and the area where they only think they could build the economy around through is to unburdened Ghanaians with taxes and tariffs increment, collapsing our companies and the industries leading to unemployment. Mahama and his cabinet are incompetent and lack the experience to manage Ghana's economy. Mahama must be bold enough to announce his resignation to the nation and leave the seat for a matured and a competent leader to lead and build the reckless, shameful and demonic economy we are seeing now

Today's Ghana economy is as a result of the mismanagement of find through corrupt practices of Mahama and his administration when he took over power within six Months to election in 2012 .bribing chiefs and pastors ,buying cars for young ladies, paying money to some civil society groups and etc, in order to retain power.

Mahama cannot fix the economy which he knows by himself. He is only using his good communicatorship experience to play game on Ghanaians intelligence .He would only be given talks till his four years term of office. His talks at the end, doesn't become pragmatic only just a fallacy .We can not tolerate Mahama to his four years term of office. He and his administration are not trying to be productive but rather a destructive government .

Mahama's one year administration and his State of the Nation's Address could only be observed as gimmick, trickster, propaganda and reckless economy.

After Fifty Seven (57) years of independence all that Ghana could boast of as a nation and as a legacy leaving behind for the younger generation are; corruption, hardship, injustice, lack of respect for rule of law, indiscipline, lack of transparency, impurity and etc.He must throw in the towel and leave Ghana's highest seat of office for Ghanaians.