Dealing with crimes: go beyond the statistics - Dr. Aning 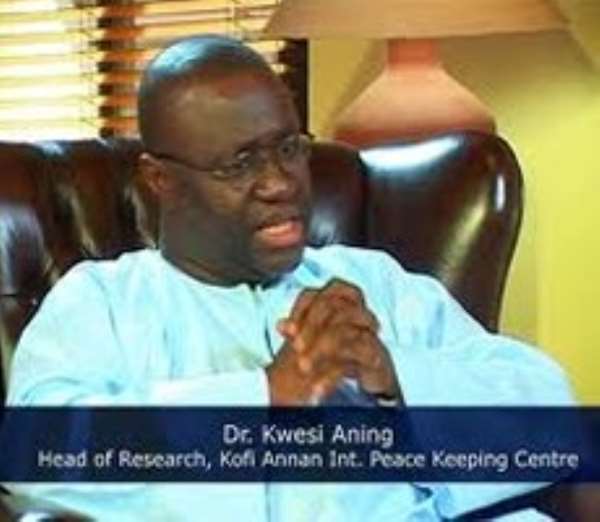 The Director of Research at the Kofi Annan International Peace-Keeping Training Centre (KAIPTC), Dr. Kwesi Aning says the authorities responsible to ensuring the security of the people in the country, should go beyond the statistics and ensure that people feel secured.

According to him, a 15% drop in major crime rate is a key reduction but that should not taken for granted.

Speaking to Joy News, Monday, Dr. Aning advocated that there should be police visibility to make people secure in their daily activities.

"We need to make our communities feel secured", he emphasized.

Dr. Aning was reacting to the deputy minister of Interior, Mr. James Agalga, claim that major crime rates have reduced by 15% this year as compared to last year.

According to him, the ministry of interior and the police authority are considering complaints by Members of Parliament (MPs) that they do not feel secured in the Chamber of the law-making body in view of recent spate of killings that is currently happening in the country.

Mr. Agalga said that the recent acts of killings in the country are unfortunate noting that the situation should not be blown out of proportion and create unnecessary panic among the people.

He pointed out that the police patrol visible in the communities to make people feel secured as the security agencies are better resourced currently to protect the people.

"The police have not done badly over the years", he stressed.

The deputy minister made his comment on Joy News following concerns expressed by MPs in Parliament Monday, about the recent spate of killings in the national capital.

The MPs are demanding answers from the security heads for the mysterious killings in the nation's capital.

Over the past three months, some residents especially in Accra and Tema, have been mysteriously murdered.

The latest to be killed is a-50-year old businessman in Tema Community four last week.

The MPs want the Interior Minister to brief the law-making body on security measures being put in place to avert future murders.

Joy News' Parliamentary correspondent Elton John Brobbey reported that the MP for Ablekuma West, Ursula Owusu-Ekufful, as saying the recent spate of killings may be akin to contract killings.

She cited the murder of Fenec Okyere, manager to hip-life star Kwao Kesse and other high profile murders that have been recorded lately.

She was worried that not a single suspect had been arrested for the killing.

She wanted the Interior Minister to assure the nation that the police and other security personnel are up to the task and that the citizenry are safe.

MP for Garu Timpane, Dominic Azuma fears MPs may soon be target of criminal attacks, as his information from police sources indicate.

This, he noted, is due to perceptions that MPs are rich.

He cited an incident in which one of his colleague was attacked by armed men, who stole his property, but was lucky to escape.

He said the police must do something different to convince MPs that they are on top of their job.

"Something must be done and done very fast," he stated adding that government must provide all the needed logistics for the police to be able to carry out their duties as expected.