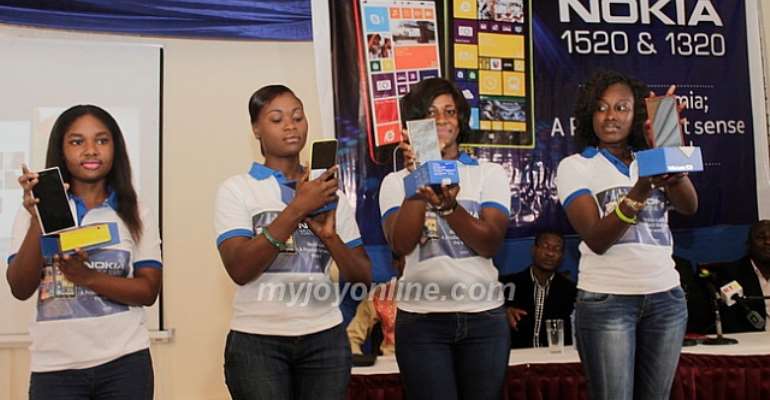 Members of the mobile phone fraternity in Ghana are yet have another opportunity to experience the latest mobile handset from Nokia.

The company has unveiled its first 6-inch Smart Phone the Nokia Lumia 1520 and Lumia 1320 onto the Ghanaian market over the weekend.

To compliment the launch of both devices, Nokia has kicked off the story teller competition which would allow people share inspirational stories of friends and get the opportunity to win an all expense paid trip to London.

With a 6-inch 1080p full HD screen, the Lumia 1520 has enhanced start screen featuring an additional 3rd column of live tiles allowing people to get to their favorite application faster with less scrolling.

Speaking on both devices, Mr. Olumide Balaogun, Senior Manager, Product Marketing for Nokia West and Central Africa noted that the introduction of the Lumia 1520 and 1320 will revolutionalize the smart phone market and boost Nokia's competitive edge in the phablet category .

He said both devices are designed with the latest Lumia Black software which is an update of the windows 8 operating system.

Everything is done to ensure that Ghanaians get the best mobile communication experience on the Lumia 1520.  He said the  affordability of both Nokia Lumia 1520 and 1320 is to enrich consumers' experience.

In the late 90s Nokia handset became the best choice of most mobile phone users in Ghana thus becoming household name in the country.

The story is not the same as the influx of similar products from competitors and their aggressive penetration dwindled the company's market potentials but Mr. Kolawole Osinowo, Nokia's Communications Manager for West and Central Africa says, Nokia does not compete but the brand is a competition for others.

He said the company focuses on brands that people can identify themselves with which meet their expectation.

Nokia is a global leader in mobile communications whose products have become an integral part of the lives of people around the world.

Every day more than 1.3 bullion people use Nokia to capture and share and share experiences, access information, find their way or simply to speak to one another.

Nokia's technology and design innovations have made its brand one of the most recognized in the world . Story by David Andoh-Ghana-myjoyonline.com